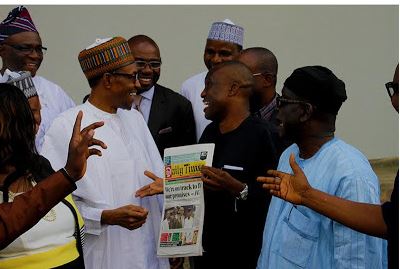 Nigeria’s pioneer newspaper and doyen of the media industry, the Daily Times, has clocked 90 years. To celebrate this exciting milestone in Nigeria’s media history, Folio Communications Limited, the holding company and owners of Daily Times and six other titles, has lined up several activities that will last two months, between June and July 2016.

The celebration of this heritage newspaper, according to Folio Communications Limited Board Chairman, Mr Fidelis Anosike, contrary to any other opinion, remains the celebration of the Nigerian media industry. Anosike explained that the Daily Times anniversary would be used to re-evaluate the contributions of Nigerian media practitioners to nation building and galvanization of the more than 250 constituent ethnic nationalities.

“We are not only celebrating Daily Times of Nigeria as a newspaper, we are celebrating great Nigerians like late Chief Adeyemo Alakija, Ernest Ikoli, and Alhaji Babatunde Jose. The others are Dr Patrick Dele-Cole, Chief Segun Osoba, Uncle Sam Amuka, Mr Peter Pan Enaharo, Dr Yemi Ogunbiyi, Chief Innocent Oparadike and Chief Onyema Ugochukwu. Some of the Daily Times celebrated media professionals also include Mr Tony Momoh, Mr Edwin Baiye and Dr Onukaba Ojo, among others. “We have quietly reinvented and reinvigorated the newspaper toward providing leadership in quality news disemination for Nigerian youths, the political and business elites.

“Our focus drawing from the vibrancy of the then young Nigerians that managed Daily Times in the 1960s, 1970s and early 1980s is the Nigerian youths. “The emphasis on youths is to help them chart their career path with added impetus and faith in the Nigerian polity,” Anosike said.

According to the Chairman, the repositioning of Daily Times in the coming months with skilled and quality personnel will be followed by the refloating of other titles within the stable like the Business Times, Sunday Times and Lagos Weekend, among others.

He also commended Nigerian journalists and other media pratitioners for their commitment to the profesion and nation building, adding that the national economic and financial challenge calls for understanding and suggestion to sustain the newspaper industry.

“Most of us publishers appreciate the challenging environment and will do everything possible to maintain the industry as a going concern,” Anosike said.

The schedule of the two months lined up activities showed that the board and management led by the publisher of Daily Times would be kicked off with a visit to media houses, governments and corporate organisations.