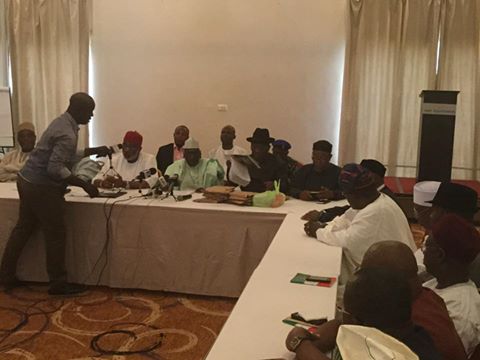 The national caretaker committee chairman of the Peoples Democratic Party, PDP, Senator Ahmed Makarfi, has advised a factional chairman of the party, Senator Ali Modu Sheriff, to tow the path of dialogue over the forthcoming governorship election in Edo State.

Mr. Makarfi gave the advice on Monday in Abuja when he received the report of the Edo governorship primaries.

“Once again, I call upon the former chairman of PDP, my colleague and friend Sheriff and those associating with him to follow the path of dialogue.

“They should not to do anything further that will cause PDP harm in Edo state”, said the caretaker chairman.

Mr. Sheriff, who is laying claim to the chairmanship position of the PDP, declared the primaries conducted by the caretaker committee as illegal and went ahead to announce the conduct of a fresh primary by his faction on Wednesday (tomorrow).

Makarfi, however, stressed the importance for party members to work together as INEC had stated that it required 21 days’ notice to monitor any primary.

“This means validly and legally, no primary can be conducted apart from the one which we conducted and monitored by INEC.

“If the intention is not to cause the PDP to fail the election, any talk towards conducting other primaries in Edo by anybody either within or outside the state is supposed to have ceased by this time.

Mr. Makarfi commended members of the primaries committee for living above the board while carrying out the assignment given to them by the party.

He said the committee had set a standard that needed to be emulated at all levels of the party’s primaries to make the election transparent.

The chairman of the primaries committee, Gov. Dave Umahi of Ebonyi, while submitting the report, said the primary was peaceful and successful.

Mr. Umahi urged party members to continue to believe in PDP as well as support the party’s candidate in the September 10 election.

He commended the maturity and respect Mr. Makarfi and his team accorded Mr. Sheriff in handling the party’s leadership crisis.

He also called on leaders of the party to persuade Mr. Sheriff to discontinue the path he was going in order to have a united house in the PDP.

“Let me also appeal to Sheriff that no one can be greater than the party. He may have been wronged on moral ground, but by the reason of our party’s constitution, let him have a rethink”, he said. (NAN)