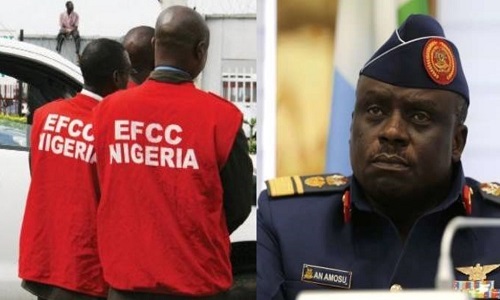 The Economic and Financial Crimes Commission (EFCC) has filed a money laundering charge against immediate past Chief of Air Staff, Air Marshal Adesola Amosu Nunayon (retd.), at the Federal High Court in Lagos.

The anti-graft agency accused them of converting N21billion from the Nigeria Air Force around March 5, 2014 in Lagos.

They were also accused of concealing “proceeds of crime” and thereby committed an offence contrary to Section 18(a) of the Money Laundering (Prohibition) (Amendment) Act, 2012 and punishable  under Section 17(a).

The accused persons were accused of using the aforementioned companies as front to convert and conceal the money.

Air Marshal Nunayon and Air Vice Marshal Adigun were said to have, between July 17 and September 16, 2014,  allegedly removed over N663.4million from the Nigerian Air Force accounts to purchase properties at  50-52 Tenterden Grove, London (NW4 1TH) and at 93B Shirehall Park, LondonNW4 2QU, United Kingdom.

They were accused of buying 40A, Bourdillon, Ikoyi, with N900million, and a property at Sinari Daranijo in Victoria Island with N1.5billion.

Furthermore, the EFCC said Nunayon and Adigun bought a property named as Cappadol Mall at Adetokunbo Ademola Street, Wuse II Abuja, for N750million, as well as a property worth over N1.7billion at Agobogba Street, Parkview, Ikoyi Lagos, using the Air Force’s money.

The EFCC has lined up 42 witnesses to testify against the accused when trial begins, said prosecuting counsel, Rotimi Oyedepo Isiokuwa, who also signed the charge sheet.

Count one read: “That You, Air Marshal Adesola Amosu Nunayon (Rtd), Air Vice Marshal Jacob Bola Adigun, Air Commodore Gbadebo Owodunni Olugbenga, Delfina Oil and Gas Ltd, Mcallan Oil and Gas Ltd, Hebron Housing and Properties Company Ltd, Trapezites Bdc, Fonds and Pricey Ltd,Deegee Oil and Gas Ltd, Timsegg Investment Ltd And Solomon Health Care Ltd on or about the 5th day of March, 2014 in Lagos, within the jurisdiction of this Honourable Court conspired amongst yourselves to commit an offence, to wit: Conversion of the sum of N21,467,634,707.43, property of the Nigerian Air Force, which sum was derived from stealing, and thereby committed an offence contrary to Section 18(a) of the Money Laundering (Prohibition) (Amendment) Act, 2012 and punishable  under Section 15(3) of the same Act”.

EFCC said the accused converted and concealed the sums, which they “reasonably ought to have known forms part of the proceeds of an unlawful act, to wit: stealing”.