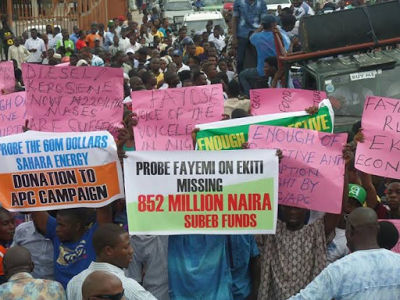 A massive protest led by some youth, including students of tertiary institutions, took place in Ado-Ekiti, the Ekiti State capital on Monday, in support of embattled Governor Ayodele Fayose.

The protesters, who took the streets of the state capital in their numbers, condemned what they described as the rascality and flagrant disrespect for the Rule of Law and disobedience of the constitution by the All Progressives Congress-led federal government.

The Special Assistant to the Governor on Communication and New Media, Lere Olayinka, who gave a narrative of what transpired at the rally in a statement to newsmen, said the placard wielding crowd of protesters moved from Fajuyi area of Ado Ekiti through Okesa, Ojumose, Oke Iyinmi, Old Garage, Ijigbo, Irona, Oke Ori-Omi, Old Governor’s Office and later converged on Fajuyi. 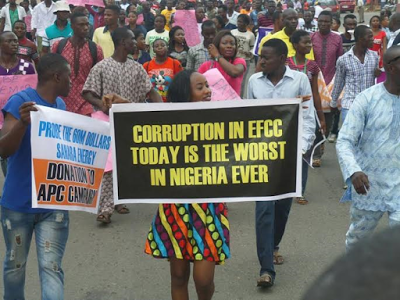 The statement quoted Mr. Oladimeji, who spoke with journalists at the rally, as saying students from various institutions joined the protest in solidarity with the government and governor of Ekiti State.

It further quoted EKSU SUG leader as saying while students do not support corruption, the fight against the scourge should not be selective. 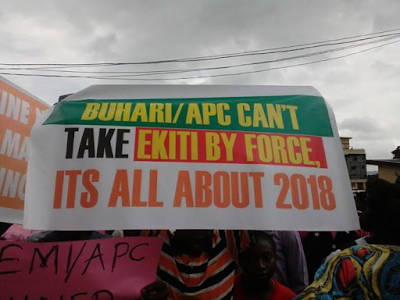 Mr. Olayinka said the protesters urged Nigerians to impress it upon the APC-led federal government to ensure that petitions against the immediate past Governor of the State, Dr. Kayode Fayemi, are looked into, especially the N850million SUBEB fund that was allegedly diverted for other purposes other than that for which it was meant.

“Another student leader who spoke at the rally, Saliu Akeem Dennis, said the fight against corruption should not be sectional. Citing wife of the president, Mrs. Aisha Buhari’s alleged involvement in the William Jefferson bribery scandal, Saliu hammered that rather than just telling Nigerians that the Aisha Buhari mentioned in the William Jefferson bribery scandal isn’t the wife of the president, Nigerian students expect that the Buhari administration will go ahead to fish out and prosecute whoever ‘Aisha Buhari’ from Daura is, adding that what is good for the goose should be good for the gander”, the statement said. 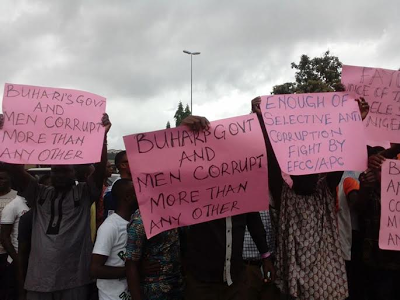 Some of the placards bore inscriptions that read, “Buhari is a dictator”, “Buhari, Obey court orders and respect Human Rights, we are in Democracy”, “Buhari/APC can’t take Ekiti by force, it’s all about 2018”, etc.