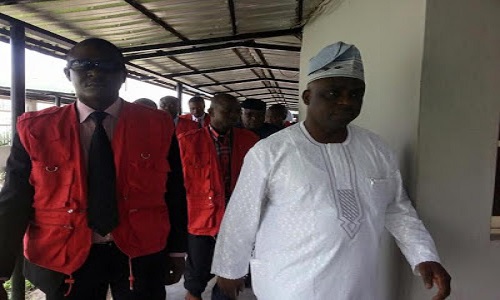 The immediate past Chief of Air Staff, Air Marshal Adesola Amosu (rtd), charged with laundering N21billion, has returned N2.6billion to the Federal Government, it was learnt yesterday.

Lawyer to the former Air Chief, Bolaji Ayorinde (SAN), who was making an argument for liberal bail conditions for his client yesterday before Justice Mohammed Idris of the Federal High Court in Lagos, said Amosu had returned “collossal sums” to the federal government.

The “colossal sums” made reference to by Chief Ayorinde, is to the tune of N2.6billion, it was learnt.

The Economic and Financial Crimes Commission (EFCC) arraigned Amosu along with a former Chief of Accounts and Budgeting at the Nigeria Air Force, Air Vice Marshal Jacob Adigun, and a former Director of Finance and Budget, Air Commodore Olugbenga Gbadebo.

EFCC accused them of converting N21billion from the Nigeria Air Force around March 5, 2014 in Lagos and concealing “proceeds of crime”, thereby committing an offence contrary to Section 18(a) of the Money Laundering (Prohibition) (Amendment) Act, 2012, which is punishable under Section 17(a).

Arguing the bail application, Ayorinde said his client, who pleaded not guilty, had always been cooperative with the prosecution since his arrest in January and would not jump bail.

“He has remitted colossal sums of money to the Federal Government, although not in admittance of guilt, but out of cooperation with security agencies.

“My application is that bail be granted to the first defendant on self-recognisance. Let those terms be liberal. He has been reporting to the EFCC, sometimes twice a week. The first defendant will make himself available for trial”, the Senior Advocate of Nigeria said.

Prosecuting counsel, Rotimi Oyedepo, did not oppose the bail application by Ayorinde and the other lawyers to the co-accused persons, but urged the court to make the terms stringent.

Justice Idris granted them N500 million bail each, with two sureties in like sum.

The sureties, he noted, must be property owners within the court’s jurisdiction.

While ordering Amosu and Gbadebo be remanded in prison custody, the court ordered that Adigun be kept in EFCC custody due to his health condition pending when he perfects his bail terms.