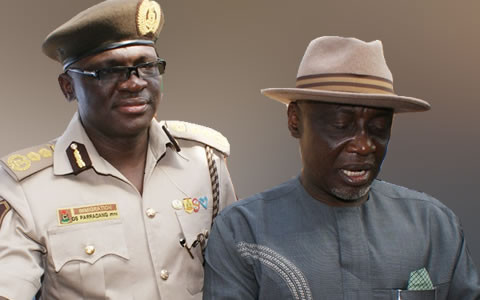 Former Comptroller-General of the Nigeria Immigration Service (NIS), David Parradang, yesterday denied knowledge of the ill-fated recruitment exercise into the service by former Minister of Interior, Comrade Abba Moro, in which over a dozen applicants reportedly lost their lives in 2014.
Parradang made this known in his testimony before a federal high court sitting in Abuja.
The former Immigration boss, who was the first prosecution witness (PW1) called to the stand by the Economic and Financial Crimes Commission, EFCC, in the ongoing trial of Mr. Moro, said he only learnt of the recruitment exercise when he saw them in publications requesting qualified and interested members of the public to apply.
The former minister was arraigned by the EFCC alongside the former Permanent Secretary of the ministry, Anastasia Nwobia; a deputy director, F.O. Alayebami; and Drexel Tech Nigeria Limited while Mahmood Ahmadu, was said to be at large.
They are accused of defrauding 676,675 applicants of the sum of N676, 675,000, being the total of N1,000 paid by each applicant to Drexel as application fee ahead of the recruitment.
They pleaded not guilty to the charges.
Led in evidence by counsel to the EFCC, Aliyu Yusuf, at the resumed hearing of the case on Wednesday, Mr. Parradang, who served as Comptroller General from June 2013 to August 2015, said he was shocked and immediately approached the then minister over the development because the NIS had a delegated authority to recruit from a certain cadres.
He said when he asked Mr. Moro if that authority had been withdrawn from the exercise, the former minister told him not to worry.
However, a mild drama played out when the EFCC sought to tender a letter written by the former Immigration boss to two members of the Civil Defence, Immigration and Prisons Service Board (CDIPB), asking them if they were aware of any recruitment advert for the NIS, to which they denied knowledge.
Defence Counsels Paul Ewekoro, Chris Uche and S.I Ahmed, all SANs, objected to its admissibility.
In his response, the prosecution counsel said the defence does not need to object but can raise the issue at the final address.
Consequently, Justice Nnamdi Dimgba fixed Friday for ruling on the admissibility of the document.
He also advised the parties to reconcile documents that would be relied upon to ensure smooth prosecution of the case.