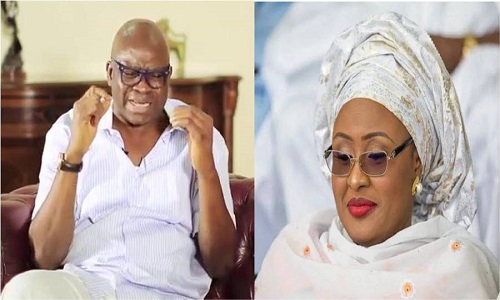 Indications emerged Thursday that the Governor of Ekiti State, Mr. Ayodele Fayose, called the bluff of the wife of the president, Aisha Buhari, to retract a statement he made linking her to convicted American Congressman, William Jefferson’s bribery scandal.

Mrs. Buhari had through her lawyers, dispatched a letter to Governor Fayose via courier last week Wednesday, demanding for unqualified retraction of the “very wild and unfounded” allegation against her, which was published in various media outlets, including Information Nigeria.

The wife of the president gave the Ekiti governor five working days to retract the false statement or be ready for a legal action.

It appeared Mr. Fayose chose the latter option as checks revealed that the ultimatum which Mrs. Buhari issued to him demanding a retraction, expired yesterday, Wednesday.

It was learnt that as at yesterday night, the Office of the Wife of the President was yet to receive any response from the governor or any of his representatives.

Meanwhile, Mrs. Buhari, who is presently in Saudi Arabia for lesser hajj, has yet to formally disclose if she would be giving her lawyers the go ahead to institute legal proceedings against Gov. Fayose in court.