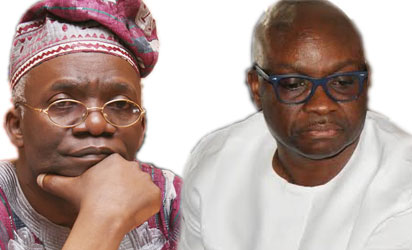 Mr. Olayinka said the former President of the West African Bar Association is a lawyer, who is always out to defend any position that aligns with his “selfish desire”.

“Falana is only deceiving the Economic and Financial Crimes Commission (EFCC) on Governor Ayodele Fayose’s matter because of his ambition to contest the Ekiti State Governorship election in 2018, thinking that he can achieve what he used the EFCC to achieve against Governor Fayose in 2006 ten years after”, Mr. Olayinka said.

The media aide was reacting to a widely circulated statement by Mr. Falana titled “The Limit of Gov. Fayose’s Legal Immunity” on Thursday, in which he argued that the EFCC acted within the ambit of the law in freezing the personal bank account of his state governor.

Citing various legal jurisprudences to back his position, the lawyer further called for the prosecution of the governor for treason, arguing that the immunity, which Mr. Fayose claims to enjoy, “has been watered down” by reason of his (Fayose) admission that he partook in the “coup which occurred in Ekiti State which culminated in his emergence as the Ekiti State governor”.

Mr. Olayinka, however, said it was shameful that a lawyer of Mr. Falana’s standing could make such arguments.

“Even though this comment coming from Femi Falana ought to have been ignored like we have always done because his hypocrisy has become so legendary that he should no longer be taken seriously by sane minds, it was shameful that Falana, a Senior Associate Nigeria (SAN) could say that EFCC can freeze Nigerians bank accounts and obtain a court order later even when Section 34 of the EFCC Act provided that a court order must be obtained (ex-parte) and made available to the bank manager before a bank account can be frozen”.

Olayinka said further; “Court Order is a condition precedent before a bank account can be frozen and Section 34 of the EFCC Act is very clear on this. It is unambiguous. It presupposes that EFCC cannot freeze the bank account of any Nigerian, no matter the status without first obtaining a court order and making same available to the bank manager.

“This position was also expressed by Justice Gabriel Kolawole of the Federal High Court, Abuja, yesterday when he ordered the EFCC to pay N12.5 million damages to the son of former Governor Murtala Nyako, Senator Abdulaziz Nyako for unlawful freezing of his account and illegal detention.

“It is therefore strange that a SAN could tell Nigerians that EFCC can carry out an action first and obtain court order to justify the action later.

“Obviously, opinions of lawyers like Femi Falana are better left in the trash cans and Nigerians should begin to thank God that he was not made Attorney General of the Federation and Minister of Justice.

“It is also important to tell Falana to seek the face of the Lord for forgiveness of his sins against Ekiti and Governor Fayose in particular, because it appears God deliberately frustrated his bid to be appointed Attorney General of the Federation and Minister of Justice because of what he would have used the position for.

“For instance, over ten Ekiti indigenes were murdered during the APC government of Dr Kayode Fayemi, Falana kept silent. He also kept silent when the future of Ekiti State was being mortgaged to frivolous loans and deductions from workers salary were not being remitted. It also made no meaning to Falana that democratically elected local government chairmen and councillors were sacked and council election was not conducted throughout the four years of APC government in Ekiti State.

“Instead of hiding under human rights activism to perpetrate evil against Ekiti and its people as he has always done, Falana should be bold enough to declare his governorship ambition, which is not hidden and let’s see how far he can go this time around.

“Like we have maintained, this is 2016 and 2006 that Falana and his criminal collaborators used EFCC to remove Governor Fayose whose impeachment was later declared illegal by the Supreme Court”.