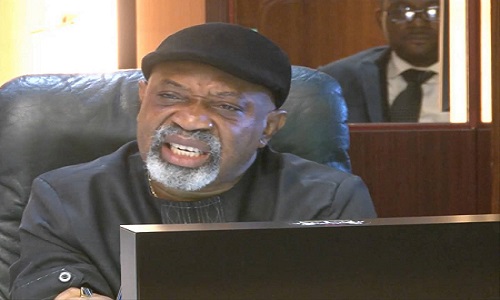 The Federal Government on Tuesday sounded a note of warning to employers in the financial sector, especially banks, saying it would not hesitate to withdraw the operating license of any bank or telecommunication company that ignores its directive to stop mass sack of workers.
The Minister of Labour and Employment, Senator Chris Ngige, expressed shock that his directive last Friday to banks to suspend the ongoing mass retrenchment of employees pending a stakeholders meeting scheduled for next month, was disregarded.
There were reports on Tuesday that 200 staff of Skye Bank were given sack letters.
The development did not go down well with the minister, who warned that government would not sit back and watch companies sack workers without recourse to laid down procedures.
Mr. Ngige stressed that it was government’s duty to protect jobs in this harsh economy.
Speaking to Nigerian journalists on the sidelines of the ongoing 105th session of the International Labour Congress, ILC, in Geneva, Switzerland, the Minister, who earlier delivered a speech at the ILO National Assembly, said “We will go a step further if they continue. We know what to do. After all, the banks have the licenses given by the government.
“We know what to do. They need to comply. They need to come to the negotiation table. We did (halted the spate of sack to hold a stakeholders meeting) that in the oil industry and we succeeded. Even if you are going to lay off, there is a way to declare redundancy, there is a process”.
According to Ngige, a former senator, “Section 20 of the Labour Act says it. You must call the unions and discuss with them. You don’t just treat them as slaves in their own country and you want us to keep quiet”.
He stressed that the only way to avoid government sanctions was for the recalcitrant banks to maintain the status quo, vowing that as long as he remains minister of labour and employment, “I will protect the interest of workers”.
The minister stated that the directive applied to telecommunication companies, who he accused of compiling sack lists “without discussing with anybody”.