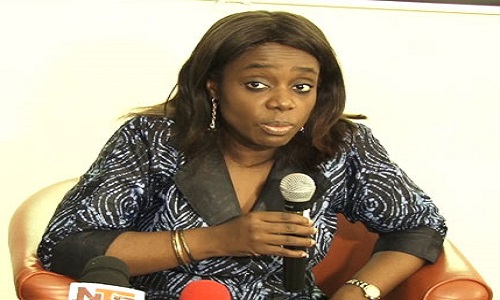 The Minister of Finance, Kemi Adeosun, has dropped the hint that the total budgetary spending on 2016 capital expenditure may be reduced by the federal government amid the disclosure that the budget would not be fully implemented.
The minister gave the hint in London while addressing international investors.
Our correspondent reports that the capital expenditure in the Appropriation Bill passed by the National Assembly and signed by President Muhammadu Buhari is N1.59 trillion – 15 per cent lower than the N1.86 trillion proposed by the Executive in the Medium Term Expenditure Framework.
The figure (N1.59b) represents 26 per cent of the N6.06 trillion 2016 budget signed by the president.
Though Mrs. Adeosun was not specific on the expected amount to be yanked off the 2016 budget or any capital expenditure head to be affected, a source at the Budget Office claimed that over 50 per cent of the capital expenditure budget would not be implemented. This means only the sum of N795 billion would be available for spending on capital projects in the fiscal year.
According to the minister, who spoke while addressing international investors, the decision to reduce capital expenditure spending was favoured against an option of increased borrowing to plug the increasing revenue gap.
Recall that the 2016 budget has a deficit of N2.21 trillion or 2.14 per cent of GDP, which the Executive said will be sourced from domestic and foreign borrowings with the promise that it will be applied strictly to financing capital expenditure.
Speaking further, the Budget Office source, who spoke under the condition of anonymity because he is not authorized to speak to the press, said the unimplemented portions of the 2016 budget would be transferred to next year’s.
Although Adeosun said the government would not want to increase its debt to GDP ratio in 2016, she hinted that the ratio would eventually go up over the next three years to about 20 per cent from current 13 per cent.
This means that the current administration plans to borrow annually throughout the span of its first four years.
Meanwhile, the minister stated that the Treasury Single Account, TSA, which was N2.9 trillion in March, has witnessed significant increase to N3.3 trillion in May.
She further noted that the finance ministry was continuing to discover pockets of revenue that had escaped its net, including visa fees, airport landing charges and shipping levies.