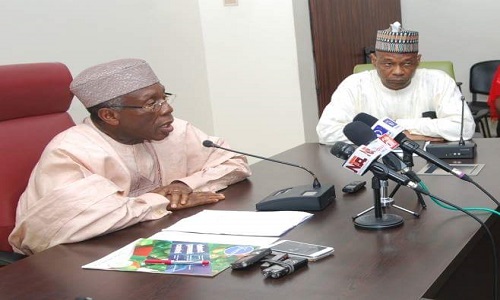 Towards the establishment of grazing reserves for herdsmen across the country, the Federal Government has concluded plans to meet soon with key Fulani leaders to solicit their support for the policy.
The grazing reserves are aimed at reducing to the barest minimum, the recurring deadly clashes between herdsmen and farmers in the country.
Speaking at a retreat in Abuja on livestock and dairy development in Nigeria, the Minister of Agriculture and Rural Development, Audu Ogbeh, gave indication of the federal government’s determination to solve the myriad of problems confronting the nation, including the frequent herdsmen/farmer clashes.
He said: “We are in trouble. Every country gets into trouble from time to time, even the most developed. But that’s not an excuse for where we are. However, we are in trouble, our economy is down, our earnings are low, we have all kinds of conflicts and we are also hungry. As Mr. President said when he signed the budget this year, he said, ‘I feel your pains,’ and we can truly feel it.
“The cost of food is high, it is difficult to pay school fees, power supply is epileptic because of destruction of gas supply facilities and there are many more concerns. But whenever you are in trouble, that’s the time to think. Lamentations don’t help, which is why organized programmes like this are meant to fix some of these problems we have.
“In the next few days we shall be meeting key persons among the Fulani and we will talk to them to get their buy-ins into the programmes that we have as part of addressing these concerns”.
According to Ogbeh, Nigeria spends $1.3bn annually importing milk and its related products, adding that government had over the years failed to categorize herdsmen as farmers, not until the situation degenerated to deadly conflicts in towns and remote communities.
He said: “We are facing a conflict, we have to end it and we will end it. Take my word for it! We’ve had enough killings of innocent citizens. No country can boast of how many of its own citizens that its own citizens kill every day. It is not an achievement. Those perpetuating these acts should know that evil has a way of returning to its source. No wonder Shakespeare said, ‘upon horror’s head shall horror accumulate’. So we must do everything to stop the killings”.
The minister also used the occasion of the retreat to announce that the number of states that have provided land for the establishment of grazing reserves had increased to 13, up from the 11 that was announced last week.
In the same vein, Governor Aminu Tambuwal of Sokoto State affirmed that while “the roaming about of cattle is not the best way to raise them and it is not the best way to ensure that you have a healthy and more beneficial cattle”, there should be a proper and a more constructive engagement with the herdsmen and herds’ owners.
Gov. Tambuwal also pleaded with herdsmen and herds’ owners to “please, in the interest of peace and in their own interest, embrace the policy of the Federal Government to minimize the risks on their lives and on their livestock”.