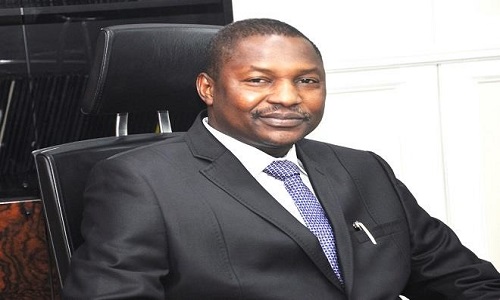 The Senate on Tuesday summoned the Attorney General of the Federation and Minister of Justice, Mr. Abubakar Malami (SAN) to appear before it and explain his reason for dragging Senate President Bukola Saraki and his deputy, Ike Ekweremadu, to court over alleged forgery of the Senate Standing Rules.

The summons on the AGF was sequel to a motion raised by Senator Dino Melaye, (Kogi West) titled: “Imminent threat to our democracy”.

The Senate resolved to invite Malami to explain why he allegedly disregarded and reopened the alleged forgery case against Saraki and others when a court of competent jurisdiction had struck it out.

According to the upper legislative chamber, Justice Gabriel Kolawole of Abuja High Court adjudicated and ruled on the matter, affirming that the issue is an internal affair of the Senate.

Senate Committee on Judiciary, Human Rights and Legal Matters, in a letter NASSIS/CJHL/024/2016/10 dated 27th June, 2016 and addressed to Hon. Attorney General of the Federation and Minister of Justice, said Malami should appear before it on Thursday to explain his role in Saraki and Ekweremadu’s arraignment.

The letter was received at the AGF office on Tuesday.