Report reaching us indicate that former Nigerian President Goodluck Jonathan has returned to the country.

The former President spent some weeks in the U.S., United Kingdom and Côte d’Ivoire. 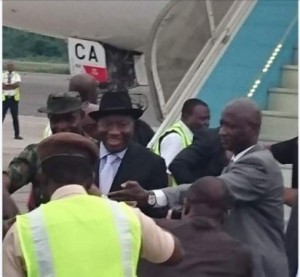 This put an end to the speculations that the former Nigerian leader had gone into exile following the resolve by the federal government to arrest him on allegations of corruption.

Speaking exclusively to ThisDay recently, the former president confirmed that he had been out of the country for over a month, revealing that he travelled to some cities in the United States of America, then departed the country for London before arriving Cote d’Ivoire via Paris.

He said: “Yes I am in Cote d’Ivoire, I have been here for a week resting and this is my second trip to the country since I stepped down as president.”

He maintained however that he was not in exile because he had no reason to leave Nigeria as he had done his best for his country as president.

“I have made sacrifices for Nigeria. I am praised all over Africa for averting bloodshed and for the peaceful transition from one government to another, but it seems Nigeria does not appreciate my efforts.

“I have done my best for this country and if I have to die for it, I will do so. However, I am taking it easy here (Cote d’Ivoire) and when I am ready, I will come back,” he said.