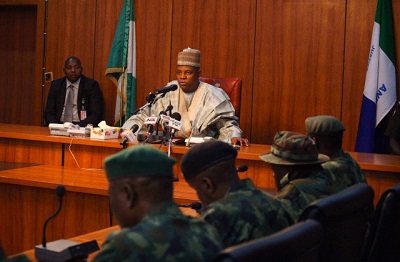 Amid allegations of diversion of relief materials donated to Internally Displaced Persons (IDPs) camps, security agencies have placed some Borno State Government officials entrusted with the distribution of the relief materials under watch.
International donor agencies, government agencies, philanthropic individuals and corporate organizations among others have donated cash, food and other relief materials to the hundreds of thousands of IDPs in Borno State but there allegations especially on social media that officials have been stealing, re-bagging and selling some of the materials back to the displaced persons who can afford them and the general public.
The development has reportedly led to severe hunger among the IDPs spread across the over 20 camps around Maiduguri, the State capital, while officials keep smiling to the bank with the proceeds from their illicit and inhuman business.
Apparently disturbed by the allegations, the State Governor, Alhaji Kashim Shettima at a meeting with the police and the State Security Services at the weekend, gave them marching orders to arrest officials involved in the despicable act.
The charge was given by the governor after he had travelled to Bama, 75km away from Maiduguri, to personally verify the allegation.
Gov. Shettima’s visit, it was learnt, not only confirmed that many of the IDPs are hungry and malnourished on account of inadequate care, they were also dying at an alarming rate.
The governor’s aides claimed that he even cited fresh corpses of IDPs killed by hunger being buried.
The governor reportedly ordered that 61 of those with acute malnutrition be transferred to the intensive care unit of the Umaru Shehu Ultramodern Hospital, Maiduguri, immediately to save them from dying.
Another set of 478 children, alongside 219 adults with lesser cases of malnutrition, were also moved to a special care unit for proper feeding and medication, officials said.
Sources said that apart from food items, medical drugs, toiletries, beddings and clothing materials were regularly stolen and sold by greedy officials.