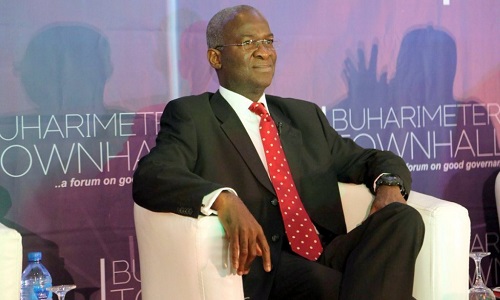 The Minister of Power, Works and Housing, Babatunde Fashola, Thursday in Abuja declared that he was not buckling under the weight of heading three key infrastructure-providing ministries.

The minister made this assertion at the inaugural “Buharimeter Town Hall Meeting”, organised by the Centre for Democracy and Development.
The Ministries of Power; Works; Housing and Urban Development were merged by President Muhammadu Buhari, who appointed Mr. Fashola, a two-term governor of Lagos State, to oversee it.
The minister, who was responding to questions from the audience during the town hall meeting, said in terms of size, the ministry was not bigger than the ministries he superintended as Lagos State governor.
“I am very grounded on that level”, he said. “There are almost 30 ministries in Lagos and about 57 parastatals and I was involved on a day-to-day basis”.
He, however, acknowledged a difference in both situations as he is still getting to know everybody under his ministry.
“What is different this time is that I am working with a team that I have just met, so it is taking time to understand everybody. We are having regular meetings. I need to know everybody on beat by name and by face”, Fashola stated.
He also said he had a capable hand as minister of state in the ministry, experienced permanent secretary and reliable members of staff.
Mr. Fashola assured that the ministry under his watch would deliver on its mandate of provision of electricity, good roads and affordable houses.
Speaking on the score card of the ministry in the last one year, the minister said he adopted three stages of “incremental, steady and uninterrupted supply” in the power sector.
He said the energy mix to be adopted in realising the three would be unveiled in a week’s time at the meeting of National Council on Power.
He said the country attained 5,000 megawatts electricity generation in February before the new wave of attacks on gas pipelines and oil infrastructure in the Niger Delta.
The minister noted that 23 of 26 power generation plants in the country were gas-powered and the challenge of assessing gas was responsible for the drop in electricity.
He said the administration was putting measures in place to resolve the problem.
Mr. Fashola said the administration had successfully stabilized the hitherto bad Jebba – Ilorin road and contractors would return to site of Lagos-Ibadan expressway in a week’s time.
He also said that the ministry was working on affordable housing project.
(NAN)