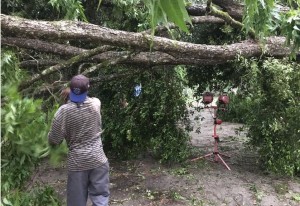 The Oyotunji African Village (a Yoruba village) located near Sheldon, Beaufort County, South Carolina, United States -has been hit a by massive storm which wrecked havoc and destroyed properties in the popular cultural community yesterday.

The Oyotunji village (named after Oyo empire) -covers 27 acres and has a Yoruba temple which was moved from Harlem, New York to its present location. See the current condition after the storm.