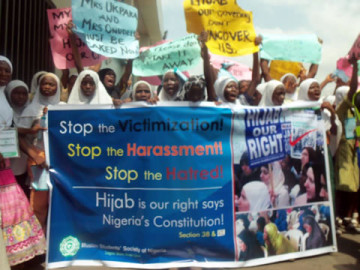 The Muslim Ummah of South West of Nigeria (MUSWEN), the umbrella body for all Muslims, Muslim organizations and the Muslim institutions located in the South West region of the country, has urged the Osun Government to, without further ado, respect a recent Court Order on the wearing of hijab by female students to public primary and secondary schools in the state.

Justice Jide Falola of the Osun High Court earlier this month affirmed the rights of female Muslim students to wear hijab over their uniforms during the school hours.

The Christian Association of Nigeria, CAN, Osun chapter, condemned the court judgment while also directing Christian students in the state to wear Church robes and other garments to school.

The row over hijab has created a tensed atmosphere in the Southwest state as both CAN and the Muslim Community in the state are presently at loggerheads over the judgment.

Weighing into the debate at a press conference addressed by its Executive Secretary, Professor Dawud Noibi, in Ibadan, Oyo state capital on Monday, MUSWEN also decried, in strong terms, the stiff opposition of the CAN leadership in Osun to female Muslim students wearing hijab to public schools originally owned by Christian Missionary proprietors.

Noibi remarked that “what the CAN leadership are doing in this case is challenging the directive of Allah”.

The MUSWEN Executive secretary declared: “We believe that, barring any attempt to frustrate the enforcement of the court order, the government has adequate machinery to enforce the order.  Indeed, only the government possesses the power to enforce all laws. To this end, we will be glad to see the Osun State Government do the needful on the court order. Justice must not only be done, it must be seen to be done”.

The group, which faulted CAN’s criticism of the Court order, wondered how wearing of hijab by female Muslim students offend Christianity.

“if CAN still feels strongly about the judgment, they should follow the commendable example of the Muslims of Lagos State by following the path of law”, it added.

Prof. Noibi further reminded the CAN leadership in Osun that the fact that Nigerian Muslims have demonstrated tolerance in the face of the imposition of the vestiges of Christian colonial legacies such as the observance of Sabbath on Sunday (and later on Saturday for Seventh Day Adventists) as well as the Gregorian calendar, should not be mistaken for weakness.

The MUSWEN scribe also gave knocks to a section of the Nigerian media which, he said, had allowed primordial sentiment to becloud their sense of impartiality by joining the fray in their editorial comments on the issue of the wearing of hijab by Osun Muslim students.

“The media should always take notice that a huge responsibility goes with the enormous power that they hold over the health of the nation”, he advised.

He then stated: “Let us all learn to adopt the spirit of give and take and accord our judiciary the respect that it deserves. Resort to self-help will ultimately help nobody.  It does not cost much for us to live together in peace and harmony.

“In our multi-religious, not secular nation, the peculiarities of the groups that make up the Nigerian State must be respected within the limits of the law. This is the only way by which we can all make progress together and in peace.

“As always, we want to appeal to all Muslims to remain calm and not to be provoked in spite of the challenging situation”.