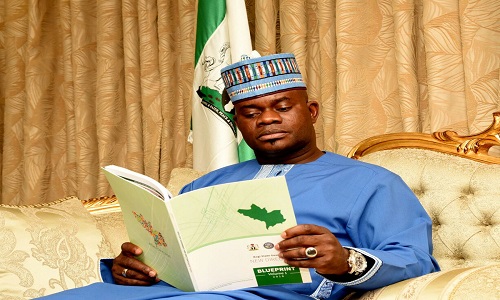 Governor Yahaya Bello of Kogi State has described as calumnious, reports in a section of the media that he was prevented by security agencies from traveling abroad, saying it is a figment of the imagination of the writers.

The governor, who pointed out that he never intended to travel, neither was he stopped by anybody, traced the source of the story, which was widely circulated on social media yesterday, to one Mr. Amuda Dan Suleiman.

According to the report, Mr. Bello was restrained from travelling for pilgrimage by security agencies, who purportedly said he did not receive clearance from the Presidency to embark on the trip.

The report further said Vice President Yemi Osinbajo (SAN) directed the governor to stay back in the state and pay workers’ salary instead of embarking on pilgrimage but he failed to heed the advice, leading to his being barred from purportedly traveling.

Debunking the report in a statement by his Chief Press Secretary, Kingsley Fanwo on Wednesday in Lokoja, the state capital, Gov. Bello blamed renegades of the opposition for the false report.

“The architects came up with so many versions of the story. To some dreamers, Buhari stopped the Governor. To some mischief-brewers, security agencies barred the Governor from travelling. And to the last set of abridged thinkers, Sen. Dino Melaye physically went to the airport to stop the Governor.

“To set the record straight, nobody stopped the Governor from travelling abroad. Nobody would have anyway, because he reserves such right to travel even as salary payments have been ongoing. Only a few MDAs who have not complied with the wage bill integrity are yet to be paid and they are few”, he said.

The statement that the mission of the purportedly sponsored report was to smear the personality of the governor and cause a distraction in a time where civil servants have refused to embark on strike.

“Governor Yahaya Bello understands that both delivery and distraction are competing for his attention. Yielding to distraction will surely stifle delivery”, it said.

On the delay in payment of salaries, Mr. Fanwo stated that all hands are on deck to ensure that genuine workers are paid promptly, urging workers to shun reports that there would be retrenchment.