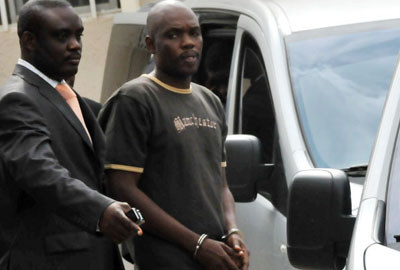 The alleged confessional statement made by Obi Nwabueze in the ongoing trial of alleged mastermind of the 2010 Independence Day bomb blast in Abuja, Charles Okah, was on Thursday admitted in evidence by a Federal High Court, Abuja.
Mr. Nwabueze, the second defendant, allegedly made an extra-judicial statement while in the custody of the Department of State Services, tying Mr. Okah to the bomb blast.
He, however, later disowned the statement, claiming it was obtained under duress.
Justice Gabriel Kolawole, while ruling in the application, held that the defendant failed to prove the involuntariness of the statement he made in the DSS custody.
Mr. Kolawole said the statement was earlier admitted in evidence during the trial of Edmond Ibiware.
He said since the case started, none of the defendants complained that they were tortured in DSS custody.
The judge said the allegation of torture was not only insignificant but self-serving.
“It is my decision that the extra-judicial statement made on Oct. 18, 2010 is admissible and hereby marked as exhibit 2D and 2D”, he declared.
The case was adjourned till July 5.