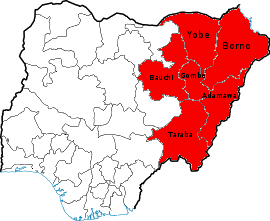 The International Office of Migration (IOM) has conducted a four-day training from 20 to 23 June in Maiduguri Borno state on Camp Coordination and Camp Management (CCCM) for government agencies and organizations responsible for camp management and emergency response.

Participants were trained on specific issues such as Global Trends on Displacement, Introduction to CCCM with a Focus on Camp Management, Roles and Responsibilities, IDPs Participation, Coordination and Information Management, Protection in Sction, Standard and Site Planning, and Camp Closure.

Fifty-four representatives of the National Emergency Management Agency (NEMA), State Emergency Management Agency (SEMA), Ministry of Health, Ministry of Women Affairs, and Red Cross from Borno, Yobe, Gombe, and Abuja camps participated in the training as part of IOM’s effort towards strengthening the capacities of the relevant government agencies to prepare and respond to humanitarian crisis in the North East.

Likewise in May 2016, four training sessions on Psychological First Aid (PFA) were conducted in Maiduguri, Yola, and Kaduna states. A total of 103 representatives from NEMA HQ, NEMA Zonal and Operations Offices, SEMA as well as local partners in 13 states participated in the training.

Similarly, in collaboration with UNHCR, IOM organized two sessions of Training of Trainers (ToT) on CCCM. The training sessions were carried out in Maiduguri and Gombe reaching out to 28 representatives from NEMA, SEMA, other relevant government and non-governmental institutions. Participants of the ToT were to pass their knowledge and skills on camp management to various relevant stakeholders through facilitating trainings or workshops.

Husnur Esthiwahyu, IOM Capacity Building Project Coordinator, stated that these trainings were based on the results of Learning Needs Assessment (LNA) conducted by IOM at the national and state level in 13 states including Federal Capital Territory (FCT) upon the request of the National Emergency Management Agency (NEMA), and State Emergency management Agency (SEMA).

Speaking about the benefit of the training, Nuradeed Abdulahi, NEMA Principal Training Officer and Camp Manager in Maiduguri said, “With my ten years’ experience in camp management, I have never been trained in camp management other than the one organized by UNHCR and this one conducted by IOM. It is really important as it exposes us both NEMA and SEMA officers to the rudiments and expected standards of camp management.”

Abdulahi also advocated for the inclusion of security agencies such as police and the military, in camp management training particularly on areas of ethics, protection and human rights.

Timothy Tile, NEMA Camp manager in Yobe said, “This is the best training I have received since I have been posted to the North East over a year ago. Constant training such as this will help us surmount numerous practical challenges we encounter in camp management. We really appreciate the effort of IOM.”

The training was funded by USAID/OFDA under the project “Strengthening the humanitarian response to the displacement crisis in North East Nigeria / Emergency mental health and psychosocial support for affected population in North East of Nigeria”.