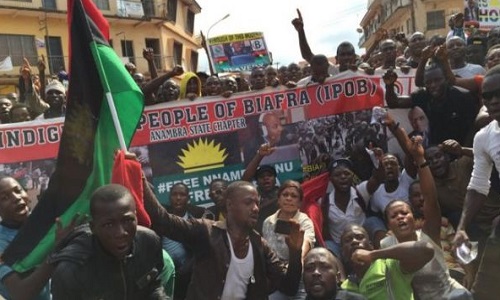 The pro-secession group known as Indigenous People of Biafra, IPOB, has asked its members worldwide to be on look out for immediate past Inspector General of Police, Solomon Arase.

The group directed its member to closely monitor and report the movements and whereabouts of Mr. Arase in order to effect his arrest and arraignment before the International Criminal Court, ICC, in The Hague, as soon as an international bench warrant is issued for his arrest.

Arase retired as IG of Police on Tuesday after he clocked the mandatory retirement age of 60.

In a press statement signed by its spokesperson, Dr. Clifford Iroegbu, IPOB said the directive to its members to keep a 24-hour tab on the retired police chief’s movements was because Arase allegedly presided over the extra-judicial killing of over 1,000 Biafrans between July 2015 and May 30, 2016.

The statement also directed that Arase’s whereabouts and movements must be monitored and logged-in with the office of the IPOB headquarters in Victoria, Spain.

It said: “It is very important to keep a record of his movements so that when the ICC finally issues the long-awaited international warrant order for his arrest, he will be easy to locate, apprehend, handcuff and fly him to The Hague for prosecution at the ICC”.

“If anyone happens to see him fleeing the country, please make calls to alert IPOB officials. For those who do not know the atrocious crimes committed by him (Arase), we have posted two of his pictures and the pictures of some of the victims he shot dead because we believe that pictures speak more than a thousand words”, IPOB added.