HBO has released a preview trailer ahead of this Sunday’s Game of Thrones season 6 episode 9, titled ‘Battle Of The Bastards’. 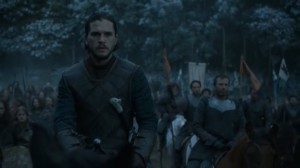 The preview shows Jon Snow and his army as they attempt to take back Winterfell from Ramsay Bolton.

Battle Of The Bastards air on Sunday, 19th of June. Watch the trailer below!