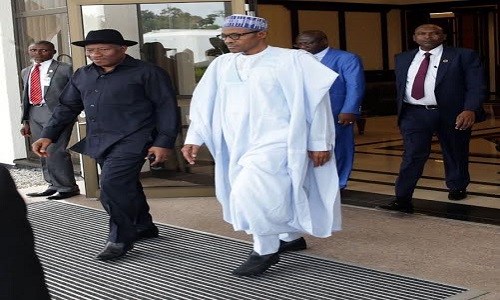 Former President Goodluck Jonathan has met with his predecessor, President Muhammadu Buhari at the Presidential Villa, Abuja.
The duo met on Friday at the president’s official residence.
The meeting came on the heels of heightened media speculations that the Buhari-led federal government was planning on arresting Mr. Jonathan over alleged massive corruption during his tenure.
It also came at a time a group known as Assembly of Concerned Niger Delta People urged Buhari to appoint Jonathan as his special envoy to the Niger Delta, to stem the rising tide of militancy and destruction of oil and gas installations in the oil-rich region.
However, details of the meeting were unknown as it was held away from the prying eyes of journalists.
There was also no official statement concerning the meeting by the two leaders.