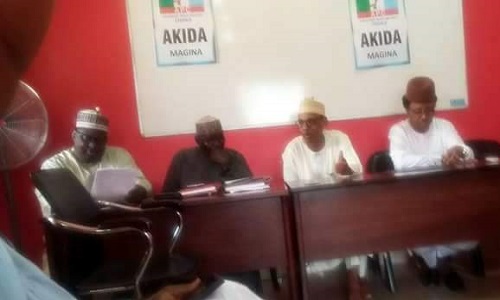 After months of internal wrangling, a splinter group of the All Progressives Congress, APC, in Kaduna State, known as “APC Akida”, has been formed.
Akida, an Hausa word, means “our Interest”.
The formation of the splinter group is the result of political differences between the senator representing Kaduna Central, Shehu Sani, and the state governor, Malam Nasir El-Rufai.
The mainstream APC in the state, which is in the firm grips of Gov. El-Rufai, suspended Senator Sani for eleven months for alleged anti-party activities – a claim the senator vehemently denies and accused the governor of hijacking the party to serve his selfish interests.
The splinter group, which said it would soon name its leaders at all levels in the state, has a leading member of the APC in Kaduna, Mr. Tom Maiyashi as convener, Alhaji Ibrahim Yaro as deputy convener while Hafsat M. Baba is to serve as secretary.
Addressing journalists yesterday in Kaduna, Maiyashi said the APC Akida will serve as a platform for key stakeholders and active members of the APC to work for the progress of the party in the state.

The convener said that in the coming weeks, the APC Akida would intensify its campaign to mobilise members to protect what he termed as their “legitimate interests”.
According to him, the group came into being because the APC has been hijacked and incapacitated by the powers-that-be in the state, a veiled reference to Mr. El-Rufai’s vice-like grip on the party.
“We believe in playing responsible and constructive roles because the government appears to have shut out basic involvement of citizens in governance”, he said.
“We came on board because our party structures do not exist or function in a manner prescribed by our party’s constitution. It does not protect the interests of our members, and one of our key goals is to help reestablish party structure at all levels”.
He said that the APC Akida was neither a faction nor an alternative party structure, adding that members of the group were only committed to seeing that the APC-led government in the state worked successfully for the people.
Mr. Maiyashi, therefore, called on the national leadership of the party to fulfill its promise to reconstruct the party at all levels in Kaduna State.
He also called on El-Rufai to lead with a sense of commitment.
Those at the meeting included Senator Sani and former interim chairman of APC in the state, Hakeem Baba-Ahmed.