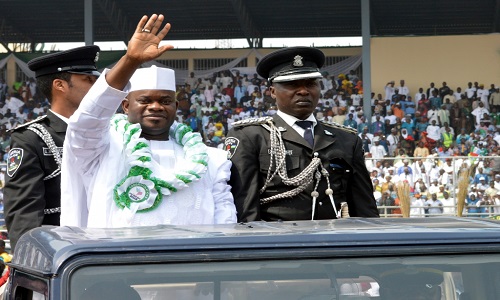 A group known as the Kogi Patriotic Front, KPF, has alleged that the Kogi State Governor, Alhaji Yahaya Bello, has bribed three justices sitting on the Kogi Governorship Election Petitions Tribunal, with N1.5billion to deliver judgment in his favour.
The KPF alleged that the deal to bribe the judges was brokered by wife of the president, Hajiya Aisha Buhari.
Mr. Bello emerged governor of the confluence state on the platform of All Progressives Congress, APC, in one of the most, if not the most controversial election in Nigeria’s recent political history.
His ‘victory’ is being challenged at the election tribunal sitting in Abuja by the immediate past governor and candidate of the Peoples Democratic Party, PDP, Capt. Idris Wada (retd.) and his fellow APC chieftain and member of the House of Representatives, James Faleke, who was running mate to the late APC flag bearer in the governorship polls, Prince Abubakar Audu.
Chairman of the election tribunal, Justice Halima Muhammad, last month reserved judgment after all the parties had filed their final written addresses.
Justice Muhammad said the judgment date would be communicated to all the parties in the matter.
Ahead of the communication of that date, the KPF in a statement issued in Abuja and made available to journalists on Sunday, expressed surprise that the Kogi Government, which has been unable to pay workers’ salaries for the past eight months, could afford to allegedly “bribe tribunal judges for selfish reasons”.
The group, in the statement entitled “Kogi Governorship Tribunal and Crooks On The Bench”, which was signed by its President, Secretary-General and PRO Babatunde Matani, Ojonoka Mathew and Oiza Sule respectively, threatened to take up the matter with the National Judicial Council.
The KPF statement reads: “Our attention has been reliably drawn to the fact that the three justices have been settled with N1.5 billion by Governor Yahaya Bello in order to pervert the course of justice. The largesse has been shared at N500 million.
“Our investigations reveal that the money has been paid in foreign currency, while the justices have assured the governor that they will deliver judgment in his favour. We have reliably learnt that the First Lady, Hajiya Aisha Buhari, brokered the deal, using her relationship with Yahaya Bello, who is already boasting of victory and celebrating over judgment that has not been delivered.
“While we may not be surprised at the desperation of politicians to get power by hook or crook, we are surprised that a State government which cannot pay salaries of workers for the past eight months can afford to bribe tribunal judges for selfish reasons.
“We intend to complain to the National Judicial Council (NJC) for this fraudulent, dubious and unprofessional crooks on the Nigerian Bench which we consider tantamount to the commercialisation of the peoples mandate. The KPF sees this as a travesty of justice and an affront on legality.
“We have our facts and we are imploring members of the public, media, civil society organisations and the intelligentsia to go ahead and carry out their independent investigation of this scam. The KPF will come out very soon with facts to open another can of worms. Our determination to free Kogi State from the pangs of enslavement and political colonisation by the Presidency of Muhammadu Buhari, is a battle of no retreat, no surrender. Long Live Kogi State, Long Live Federal Republic of Nigeria”.