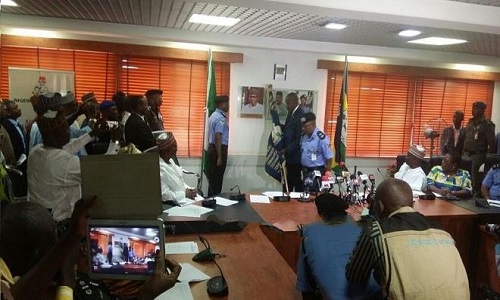 Assistant Inspector General of Police (AIG) Idris Ibrahim Kpotun on Wednesday formally assumed office as the Acting Inspector General of Police in a ceremony held at the Force Headquarters, Abuja.
AIG Kpotun was appointed Acting IGP by President Muhammadu Buhari following the retirement of Solomon Arase after attaining the mandatory retirement age of 60 on Tuesday.
Kpotun, who was in charge of operations at the Force Headquarters until his elevation to the foremost police job in the country, assumed office in a symbolic hand over to him by his predecessor in office, Mr. Arase.
In his brief remarks, the Acting IGP pledged to operate with what he called the principle of democratic policing.