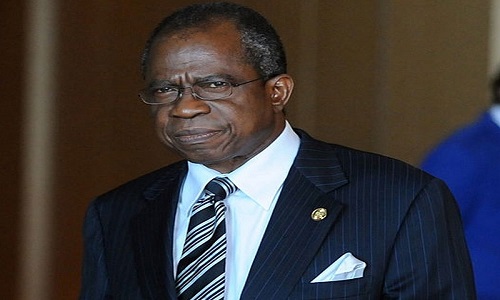 Chief Maduekwe, who was Secretary of the BoT, reportedly slumped inside a vehicle yesterday while returning from the Nnamdi Azikiwe International Airport, Abuja.

He was rushed to a private hospital in the Asokoro District of Abuja where he was pronounced dead on arrival by doctors. He was aged 71.

In a statement issued in Abuja on Thursday, Jubrin said he was shocked to learn about the death of Maduekwe.

He said that the former Nigeria’s High Commissioner to Canada passed on at a critical time when the party needed him most.

Jubrin said that he was waiting for his secretary in the BoT to return from the U.S where he traveled to, so that they could put heads together to address the current leadership crisis in the party.

“I learnt with sadness and great shock about the death of this very devoted member of the party, a very dependable member and a very useful member with whom we have worked very closely together.

“We have been trying our best to find a solution to this problem and it is so sad that Maduekwe died at a very critical moment.

“It is sad that at this critical moment, Maduekwe had to go and we are definitely going to miss him and his ideas.

“He had very fantastic ideas on the way out for our party crisis.

“Maduekwe has been national secretary of the PDP, he has been a Nigerian ambassador and so, we were utilizing his knowhow in BoT.

“He did very well for the few months he was in BoT. I will never forget him.

“I have lost a great partner”, Jubrin said.

He prayed to God to give members of the deceased family as well as PDP faithful the fortitude to bear this great loss.

Speaking in the same vein, Olanrewaju said “It is sad that we lost one of our finest men at a crucial time. I am shocked beyond words.

“He was one of the few conscientious leaders we had left because you cannot buy him with money. This was why we made him the Secretary of the BOT.

“And until he died, he was committed to the reunification and rebuilding of PDP. We will miss his rare wisdom, integrity, and courage to speak truth to power”.

In his reaction, ex-Gov. Obi described the deceased as an unusual politician, who was not afraid of his own voice, especially in speaking out on matters bordering on the way forward for the country.

“If he was brutal at certain points, it was just an insight into the depth of his passion”, the ex-governor said.