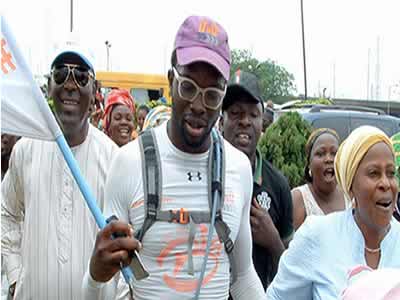 Fadesola Adedayo, made history on Monday after completing a 17 days marathon race from Lagos to Abuja and back to Lagos, to raise awareness for Steven Johnson Disease.
Fadesola, 25, reached the Gani Fawehinmi Park, Ojota, Lagos at 12:013pm after covering 11 states and 717 kilometres on a daily consecutive marathon, which commenced on the 13th of May, 2016 from the federal capital territory, Abuja.
Speaking on the rationale behind the 17 marathons in 17 days project, the marathoner said he was on a mission to create awareness and raise research funds worth $1million for Steven Johnson Syndrome, a rare skin disease that killed his brother, Adeyosola Adedayo, on March, 20 2012.
Johnson syndrome, a form of toxic epidermal necrolysis, is a life-threatening skin condition, in which cell death causes the epidermis to separate from the dermis. The syndrome is thought to be a hypersensitivity complex that affects the skin and the mucous membranes. The most well-known causes are certain medications (such as lamotrigine), but it can also be due to infections, or more rarely, cancers.
Fadesola, who got a rousing reception in Lagos on arrival, said the race was to keep alive the memory of his brother as well as to tinker out an end to the skin disease, which has been prevalent in the country since 1922.
“I chose to embark on this project to raise money and awareness for Steven Johnson Syndrome that killed my brother four years ago. And all the money will be received will go to research so that people would not have to go through what my family went through,” he said.
Also speaking, the Lagos State governor, Akinwunmi Ambode, while receiving him, assured of the state’s preparedness to boost awareness creation of the disease in the state as a significant measure to fighting it. Speaking on behalf of the governor, the Senior Adviser to the Governor on Sports, Anthony Adeyinka Adeboye, also enjoined young people to make healthy lifestyle choices.
The father of the marathoner, Dr Adesola Adebayo, told newsmen that he was inspired by the effort of his son against a life-threatening syndrome.
“This is a project that many more young people should recreate against other life threatening farces in our society,’’ he said.
Also, Abiola Adebayo, the mother of the marathoner, advised young people to influence progress and development of nations through inspired projects like that of her son.
She added that dedication and commitment were values that teenage Nigerians should be imbibing to better their lives and that of the nation.
Source: NationMirror
AdvertisementClick Here To Join The 10,000 Naira Giveaway For 100 People!