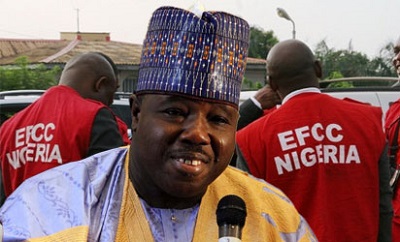 The Factional Chairman of the Peoples Democratic Party, PDP, Senator Ali Modu Sheriff, has honored the invitation of the Economic and Financial Crimes Commission, EFCC, over 2015 campaign funds.

The PDP chieftain on Tuesday, was invited at the zonal office of the anti-graft agency in Maiduguri, Borno State, to answer some questions in respect of the N23.29 billion campaign funds allegedly disbursed by the former Minister of Petroleum Resources, Diezani Alison-Madueke.

A former Minister of State for Power, Mohammed Wakil, who had earlier been interrogated by the EFCC for receiving N450 million from the N32.29b, to use in funding the PDP presidential election in Borno, allegedly gave the sum of N40m to Sheriff through one Hon. Mohammed Kumalia for what he simply termed “Security”.

It was learnt that Sheriff, who traveled to Maiduguri yesterday, was grilled at the Damaturu Road zonal office of the EFCC for several hours before he was reportedly allowed to go home on administrative bail.
Responding to enquiry on whether Sheriff was truly invited by the anti-graft agency, his spokesman, Inuwa Bwala, said: “You may recall that reports last week indicated that former Minister of State for Power, Mohammed Wakil and former minority leader in the House of Representatives, Mohammed Kumalia, claimed to have earmarked N40million from money given to them by the PDP for elections for security men.
“They were said to have claimed to route the money through His Excellency (Sheriff). We did not initially believe they said so until somebody from the EFCC hinted Sheriff”.
“He (Sheriff) seized the opportunity of his condolence visit to Maiduguri to verify their claims, and was informed that they only claimed to have shared the money to security men in his house, but without his personal involvement whatsoever. This is the truth”, Bwala said.