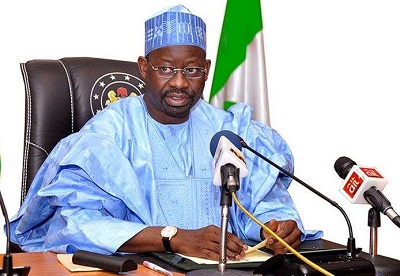 The Accountant of the Gombe State Government House, Mohammed Balbaya, has been arrested by the Economic Financial Crimes Commission, EFCC.
Mr. Balbaya was arrested for allegedly receiving N338 million from Fidelity Bank as part of the N23.29 billion made available by a former Minister of Petroleum Resources, Diezani Alison-Madueke, for the 2015 presidential elections.
The Gombe Government House accountant is said to be cooperating with investigators at the zonal office of the EFCC in the state.
It was learnt that Mr. Babalya told investigators that he was directed by a former senator, Saidu Kumo, who served as the campaign coordinator of the State Governor, Ibrahim Dankwambo during the 2015 general elections.
He further claimed that after receiving the money, he contacted the Permanent Secretary, Government House, Sani Jauro, who also doubles as the Principal Private Secretary to Governor Dankwambo.
The Accountant, who claimed he did not benefit from the illegal funds, said the money was later shared to beneficiaries.
He, however, declined mentioning the name of beneficiaries or how much each received.
Mr. Balbaya is still being held by the EFCC as at the time of publishing this report.