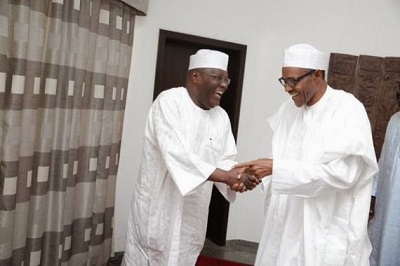 President Muhammadu Buhari has been urged to consider drafting former Vice President Atiku Abubakar to assist in deescalating the crisis threatening to turn the Niger Delta into a war-zone.
The oil-rich region has been tensed in recent weeks following the activities of the Niger Delta Avengers, a militant group that claimed responsibility for several attacks on oil pipelines and installations in the region.
The group threatened to bring Nigeria – which largely depends on oil – to its knees by reducing its oil and gas production to zero.
In a bid to diffuse tension as a result of military build-up in the region, President Muhammadu Buhari expressed his government’s readiness to engage leaders of the region including the aggrieved militants on the way out of the crisis, and has ordered the military to cease fire.
Making the call for Mr. Abubakar to be drafted by President Buhari to help resolve the crisis, the national coordinator of Adamawa Think Tank, Danladi Danasabe, said the former vice president “has a strong bond and appeal across the Niger Delta developed over long years of political and business association”.
He also said, “You know Atiku owns Intels and is arguably the biggest indigenous firm in the whole of the Niger Delta with over 50,000 employees.
“Whenever he runs for president, Turaki’s strongest grassroots support comes from the Niger Delta and I know for a fact that he used to hold regular meeting with leaders from the region and they trust him a lot”.
“I also know that Atiku is in pains now seeing what is happening in the Niger Delta and what the president needs to do is to give him the assignment and support, he would do it”, Mr. Danasabe said.