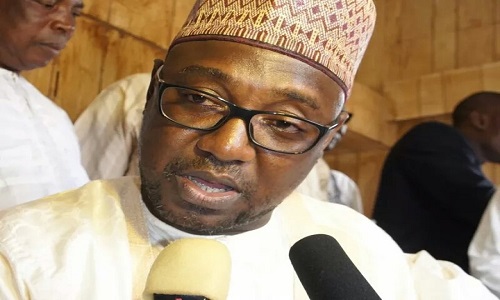 Governor Abubakar Sani Bello of Niger State has urged the people of Pandogari in Fai Local Government Area of the state to remain calm and law abiding.
The governor made the call on the heels of religious violence that erupted in the area on Sunday and spilled over to the next day over alleged blasphemous comment against Prophet Mohammed.
Although security agencies have since restored law and order with the imposition of a dusk to dawn curfew on Pandogari by the Nigerian Army, our correspondent reports that the violence claimed the lives of a 24-year-old trader identified as Mr. Methodus Chimaije Emmanuel, who allegedly made the blasphemous comment on social media, and three others including personnel of the Nigeria Security and Civil Defence Corps, NSCDC.
Confirming that peace has returned to the area in a statement on Wednesday by his Chief Press Secretary, Malam Jibrin Baba Ndace, Gov. Bello advised people to desist from giving the incident a religious or tribal colouration.
“It will be a disservice and an attempt to heat up the polity if the incidence in Pandogari is given religious or tribal colouration”, the statement said.
“We must exercise restraint in our actions and comments on traditional and online media”.
Mr. Abubakar also expressed his displeasure over the outbreak of the incident, advising stakeholders to pursue the path of dialogue, consultation and peaceful resolution of any conflict, than resort to violence.
“The path of peace and dialogue is cheaper and safer than violence. Violence is a distraction and costly path in any society. That is why I always sue for peace in our communities”, he said.
The statement said security agencies had been directed to protect lives and property in the state, adding that “anyone or group of persons found to be involved in any act capable of causing further crisis will be dealt with according to the law”.
In a related development, Governor Bello has announced the setting up of an investigative panel to look into the remote and immediate cause of the violence in Pandogari.
The governor, who described the incident as unacceptable to the government, vowed severe punishment for perpetrators of the violence.
“We have instituted an investigative panel to investigate what happened. The situation is calm now. We will await the outcome of the investigative panel so that we guard against this happening next time. This is unacceptable and whoever is involved will be severely punished”, Abubakar was quoted as telling State House correspondents shortly after he briefed President Muhammadu Buhari on the incident yesterday.