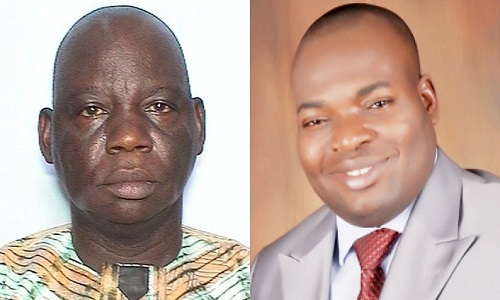 The leadership of the Peoples Democratic Party (PDP) caucus in the House of Representatives on Wednesday vowed to ensure that Tony Nwoye (PDP-Anambra) and Emmanuel Udende (PDP-Benue), who defected to All Progressive Congress (APC) on the floor of the House, lose their seats.
The affected lawmakers in separate letters they wrote to the leadership of the lower legislative chamber and read by Speaker Yakubu Dogara during the plenary session yesterday, announced their intentions to dump the PDP on whose platform they were elected, owing to the leadership crisis in the main opposition party.
Reacting to the defection of the lawmakers, the Minority Leader, Leo Ogor, described their resignation letters as unconstitutional.
He argued that section 68(g) of the 1999 constitution (as amended) provides that any member who must resign on the platform where he/she was elected, must declare his/her seat vacant.
Ogor said: “I have told those who care to listen that there is no division in the PDP. Clearly the PDP is one family, and in line with the Constitution in line with Section 68(g), which I quoted on the floor is clear on this.
“We had a national convention, signed by then national chairman, Ali Modu-Sheriff.
“The party itself went for that convention in Port-Harcourt and you know that the party convention is the highest organ of the party. It has the power to elect and remove anyone, and we saw the decisions that were taken in Port-Harcourt. And no court of competent jurisdiction has today ruled that there is any faction in PDP. Neither is there any recognised faction.
“There is a Supreme Court ruling on this matter. I pity those young men. They really don’t know what they have done. But for me, I am a law abiding citizen and I can tell you that by tomorrow morning, my party will be headed to court once I have the Order Paper for the day. We will be in court to make sure we vacate those seats, then we go for an election to replace those interlopers. They think they can go to APC, so easily but they are wrong. So long as we have a Supreme Court ruling on this matter, I am sure, they are history”.
The leader of the PDP caucus in the House of Reps, who expressed surprise over the defection of Nwoye and Udende, accused the duo of failing to consult with the PDP caucus before making their decision known on the floor of the House.
“I was not really expecting this. I am so shocked. I am so disappointed with those young men. I would have thought that they would have discussed this kind of issue with me and they know that there is no faction in the PDP. But for reasons best known to them, they are trying to create a faction.
“Like I have said, there is a Supreme Court ruling on the issue of factions, that there must be a clear division in the national executive of a party for you to say there are factions. You cannot just wake up and say, you had your on convention. And if indeed some people held a convention, they did it on their own.
“They are not even members of the national executive. None of them is. Sheriff was even in Port-Harcourt, he went through clearance. So how can they say there is a faction? In fact, there is no need to over flog this issues because by tomorrow, as soon as I have a copy of the votes and proceedings for Wednesday, my prayer will head to court”, he vowed.