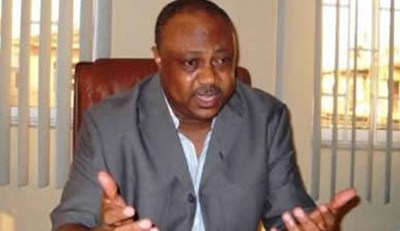 Serial governorship election contender in Delta State, Chief Great Ogboru, and former Speaker of the State House of Assembly, Victor Ochei, have formally defected to the All Progressives Congress (APC).

Ogboru was the Labour Party candidate in the 2015 governorship election while Ochei was a governorship aspirant of the Peoples Democratic Party, PDP.

The defection of the political heavy weights ended months of speculations about their political future.

Ogboru and Ochei, along with their supporters and members in the LP and Accord Party as well as some leaders of the Social Democratic Party (SDP) in Delta State, were yesterday, formally presented to the national leadership of the APC by the party’s candidate in the last governorship polls, Olorogun O’tega Emehor and the state’s Chairman, Prophet Jones Erue.

Receiving the defectors, the APC National Chairman, Chief John Odigie-Oyegun, noted that with their entry into the party, it was sure to win in Delta State come 2019.

Mr. Odigie-Oyegun was elated by the unity among the party’s leadership in the state.

Blaming the 16 years reign of the Peoples Democratic Party (PDP) for the rot in Nigeria and Delta State, Odigie-Oyegun expressed optimism that APC would upstage the Ifeanyi Okowa administration in Delta State come 2019.

He said: “I am not here because I want to be with any government in power. My mission is similar to that of Mr President. We have always had a lot in common. We have always been agents of change. Mr President is the kind of person we want to identity with and that is why I joined the APC.

“I am in full support of his resolve to reorient our values for the better. I am in support of his anti-corruption posture. We shall not tolerate corruption in Delta State. The 16 years of PDP were a waste at the state and at the centre”.

The national chairman, who described the development as one of the happiest moments of his life, said Ogboru was a member of the APC who chose to take his time to join the league of progressives in the country.

Speaking in the same vein, the Deputy National Chairman of APC, Engr. Segun Oni, said democracy would not thrive without an overwhelming membership.

He said the party’s leadership would work with all stakeholders to ensure a successful membership drive in Delta and other states.

Emehor said APC’s challenges in the state would have reduced, if it had won the last governorship election.

But the governorship candidate said the good news was that with the entrance of Ogboru and others, APC was well positioned for the next governorship election in Delta State.

In his remarks, Ochei said he was glad to join the APC, adding that there was no trick the PDP could play to rob the APC of victory in Delta State.