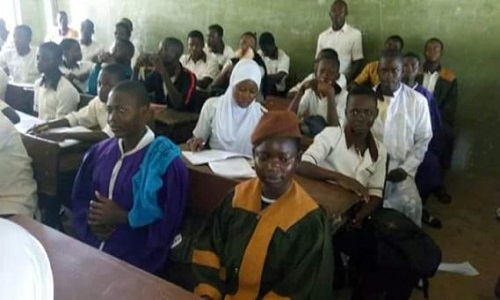 The Governor of Osun State, Ogbeni Rauf Aregbesola, on Tuesday threatened to expel students disobeying school rules in the state. He made the threat during the commissioning of the ultra-modern St Michael’s RCM Government Middle School, Ibokun.

The students’ action, which did not result in any disciplinary measures taken against them, was based on a directive by the Christian Association of Nigeria in the state to have Christian students attend school in church robes should the state government implement the judgment of an Osun High Court affirming the right of Muslim female students to wear hijab over the school uniforms during the school hours.

This is just as CAN officials in the state monitored development at the schools to ensure the students were allowed in their robes to attend classes.
Mr. Aregbesola however said all those aggrieved with the recent court judgment over hijab should channel their grievances according to the rule of law and not resort to self-help.
He also denied the claim by CAN that he interfered with the court judgment allowing female Muslim students to wear hijab to school in the state.
“The Judiciary is an independent arm of government, the decisions of which are not subject to any influence by other arms of government”, the governor said.
According to Mr. Aregbesola, there are other legal options open to any party who feels strongly about the judgment, adding that appeal is the best option in this situation.
“It is funny for some people to insinuate that government has a hand in the judgment”, he said. “The government is a democracy, not a theocracy.‎ Any student found disobeying school rule and regulation risks expulsion from our schools”.
Gov. Aregbesola stressed that it was not the business of any government, through the schools, to lead a child in a particular religious direction, pointing out that it was the duty of parents and religious institutions until the child is grown enough to make a decision on religion.
“The government therefore cannot support or be seen to be supporting a particular religion”, he said.
“The government is a democracy, not a theocracy. I believe also that parents and society should complement the government in shaping the minds of the pupils to be receptive to knowledge and godly character formation; to be sensitive to the need of others, the plurality of our society and the imperative of mutual toleration.
“They should also be brought up to be team players, even when in a competitive environment.
“It amounts to subversion of the educational needs of a child for them to be drawn into and used for political purposes”.