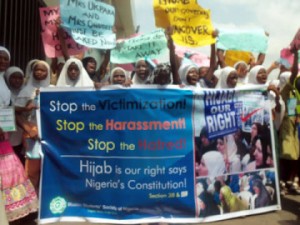 The Osun State Muslim Community has urged the state chapter of Christian
Association of Nigeria (CAN) to respect the state High Court ruling on the use of hijab on school uniforms by female Muslim students in public schools.
Recall that Justice Jide Falola of the Osun High Court penultimate Friday, while delivering judgment in a suit filed by the Muslim community against the state government, upheld the rights of female Muslim students in public schools in the state to wear hijab on their school uniforms during the school hours.
But the Osun CAN threatened a showdown if the State Government implements the judgment, which it claimed was premeditated and “deeply violated the principle of fair hearing”.
The association, therefore, threatened to direct Christian students in public schools in the state to start wearing Christian garments and vestments as part of their school uniforms once Muslim female students start using hijab in schools.
Reacting to the threat by CAN, the Vice President of Osun State Muslim Community, Alhaji Mustapha Olawuyi, appealed to the Christian body to shun what he called lawlessness in the best interest of justice and peace.
Olawuyi, who made the appeal in a press conference in Osogbo, the state capital yesterday, said there is no need for the argument over the court judgment that granted female Muslim students right to use hijab during the school hours.