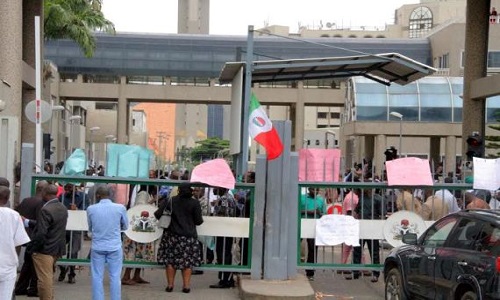 Workers in the Ministry of Finance for the second day running continued with their protest over unpaid N1.2 billion Special Overtime Allowance (SOT).

Unlike yesterday’s protest where some workers were allowed to carry out skeletal services in the ministry, Tuesday’s protest grounded activities at the sprawling headquarters of the Finance Ministry in the Central Business District, Abuja, as all entrances were shut by the protesting workers.
In its reaction to the protest by the workers on Monday, the Director of Communications in the ministry, Salisu Dambatta, said the action was not justified because the payment of SOT was stopped by the last administration in 2014 and funds not provided for the allowance in the 2016 budget.
Besides, Dambatta said the SOT allowance was not part of the remuneration in the Federal Public Service.
But the workers disagreed as they stayed out of their offices from 8am when they resumed work on Tuesday and vowed not to attend to any official assignment until the arrival of the Minister, Mrs. Kemi Adeosun.

They said their agitation would continue until the minister is either removed or their allowances paid.

The protest is still on as of the time of filing this report.