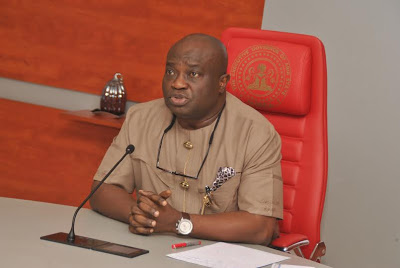 The Peoples Democratic Party (PDP) has lodged an appeal against the judgment of a Federal High Court in Abuja, which ordered Governor Okezie Ikpeazu of Abia State to immediately vacate office for presenting false tax receipts.

Justice Okon Abang, who delivered ruling in a case of alleged falsification of tax returns brought against the governor by his rival in the December 2014 governorship primary of the PDP, Uche Ogah, found Ikpeazu guilty and immediately ordered him to vacate his office.

However, in a notice of appeal dated June 28, the PDP expressed dissatisfaction with the ruling.

“The honourable trial court misdirected itself when it construed the provisions of the PDP Constitution to the detriment of the appellant without giving the appellant a chance to be heard and thereby occasioned miscarriage of justice”, the PDP said.

In the particulars of the error, the appellant said Ukeagbara and Mba being “the 1st and 2nd respondents in the appeal did not pray the trial court to construe the provisions of the PDP constitution”.

“No evidence was led that the said Uche Sampson Ogah participated in the 2015 Abia State gubernatorial elections, yet, the trial court declared him as winner of the said elections contrary to the express provisions of section 141 of the Electoral Act”, the party added.

Consequently, the appellant urged the Court of Appeal for “an order setting aside the judgment of the Federal High Court of Nigeria in suit No. FHC/ABJ/CS/10862014 delivered on the 27th day of June, 2016”.