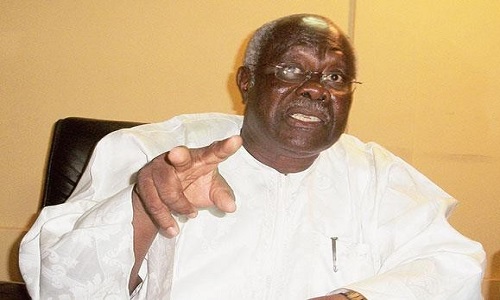 A former Deputy National Chairman of the Peoples Democratic Party, Chief Bode George, has called on the erstwhile national chairman of the party, Senator Ali Modu Sheriff and others, who have instituted court cases against the party, to withdraw same in the overall interest of the party.
Mr. Sheriff and the immediate past national secretary of the PDP, Prof. Wale Oladipo, are currently in court to challenge their removal from office at last month’s national convention in Port Harcourt, the Rivers State capital.
Major stakeholders of the PDP, including the Governors Forum, National Assembly caucus and ex-governors among others, appointed a caretaker committee headed by former Kaduna State Governor, Senator Ahmed Makarfi.
Messrs. Sheriff and Oladipo have declared the Makarfi-led caretaker committee as illegal, vowing to seek redress in court.
Reacting to the court case instituted by the duo especially, against the former ruling party, Mr. George pleaded with them to listen to his fatherly advice so that posterity would judge them well.
Speaking in an interview with journalists yesterday in Lagos, the PDP chieftain commended the Board of Trustees of the party for handing over the leadership of the party to the Makarfi-led caretaker committee.
He said, “The PDP BoT handover of the party’s structure to the Makarfi-led committee is the most sensible thing to do because the BoT is the custodian of the conscience of the party. If there is a crisis, it is the responsibility of the BoT to intervene, and we have done the best we can.
“All we are looking for is the solution to move the party forward. I passionately appeal to Sheriff and others to withdraw their cases from the court if they are truly committed to the progress of the PDP. I am also appealing to the other two from the South-West, to remember that posterity would not judge them rightly if they fail to do what is right”.