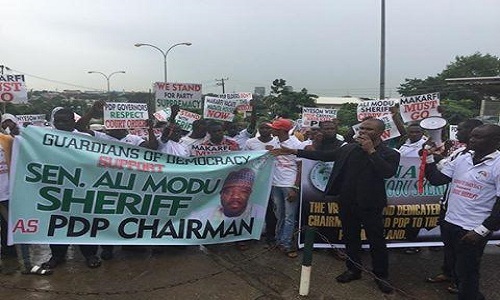 The PDP is currently at loggerheads as Ali Modu Sheriff and Ahmed Makarfi both lay claims to being Party chairman.

The party’s National secretariat in Abuja has become the venue of much of the infighting. On Tuesday, Modu Sheriff attempted to force his way into the secretariat.

Both men mobilized their supporters on Wednesday morning as they staged protests at the Wadata Plaza.

It was learnt that the anti-Sheriff protesters were the first to besiege the Wadata Plaza National Secretariat of the opposition party, carrying placards with inscriptions such as “It’s not by force to lead”, “Ali Modu Sheriff please leave PDP alone” and “Ali Modu Sheriff is APC agent” etc., in several mini buses.

The protesters, who are mostly youths, also chanted anti-Sheriff slogans and demanded that he stopped laying claim to the chairmanship position of the party.
The protesters took a short break during which time pro-Sheriff protesters also came in singing and dancing insisting that the former Borno State governor remains the party’s national chairman.

Some of the protesters who wore T-shirts emblazoned with a portrait of the embattled chairman, were also chanting solidarity songs in support of Mr. Sheriff.
Some carried placards with the inscription “PDP governors respect court order”, “Makarfi must go”, ‘Ali Modu Sheriff carry go”, etc. while dancing to traditional Hausa music.

A handful of policemen and officers of the Nigerian Security and Civil Defence Corps, NSCDC, maintained vigilance as the opposing groups carried out their protests.