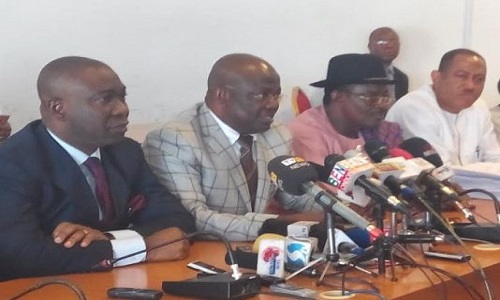 Senators elected on the platform of the Peoples Democratic Party, PDP, have withdrawn their support for the President Muhammadu Buhari administration over what they considered its “belligerent attitude” towards its members.

The PDP senators made their position known in a communique at the end of plenary on Wednesday in Abuja.

The communique, which was signed by the minority leader, Godswill Akpabio; deputy minority leader, Emmanuel Bwacha; minority whip, Phillip Aduda and his deputy, Abiodun Olujimi, was read by Senator Bwacha.

The PDP senators’ decision to withdraw support for the All Progressives Congress-led federal government followed the filing of two-count charge bordering on forgery and conspiracy by the Attorney General and Minister of Justice, Abubakar Malami (SAN), against the Senate President and his deputy, Bukola Saraki and Ike Ekweremadu, respectively.

They are accused of forging the Senate Rules to influence their election as presiding officers last year June.

Saraki, Ekweremadu, former Clerk to the National Assembly and his deputy, Salisu Maikasuwa and Ben Efeturi, respectively, are due to make their first court appearance on Monday.

The opposition PDP senators said they would withhold support for the APC government until “they cease the belligerent attitude towards PDP members”.

The communique said: “We condemn in totality, the orchestrated plot to remove the president of the Senate and his deputy through illegal means.

“The deployment of state instruments of coercion to intimidate an independent arm of government like the legislature is now a major threat to the survival of our democracy.

“The glaring witch-hunt of perceived opposition elements in the polity is invitation to anarchy.

The senators said since the war against corruption had devolved into probing campaign funds, it should be extended to all parties, APC inclusive.

“We therefore condemn in strong terms, the sentiments displayed in fighting corruption, example: The freezing of account of the Ekiti State governor, is clearly a political witch-hunt.

“The PDP Senate Caucus, therefore, wishes to warn the executive arm of government to act with caution on matters that have the potency to subvert our democracy. The Executive arm must therefore desist from these acts of lawlessness that are typical military dictatorship”, the communique said.

It also advised the APC- led government to concentrate on the existing economic and security challenges “that are threatening our survival as a nation”.