PENGASSAN Threatens To Shut Down Oil Sector In Seven Days 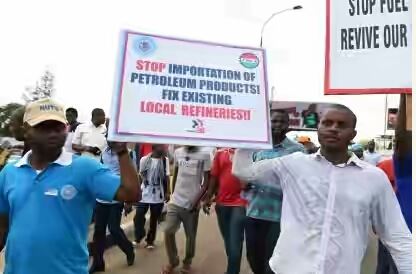 PETROLEUM and Natural Gas Senior Staff Association of Nigeria, PENGASSAN, has threatened to shut the nation’s oil sector over alleged anti-labour practices by employers, handing down a seven-day ultimatum to the Government to call the affected employers to order.

PENGASSAN in a statement weekend warned that it would not hesitate to direct members to withdraw their services and shut down the sector if, after the seven days, employers in the industry failed to end all anti-labour practices in their companies.

Other industrial issues raised by the Association include the review of the lingering irregular Joint Venture funding and Cash Call payment arrears, lack of a clear cut direction on the Petroleum Industry Bill (PIB), and forceful co-option of government agencies in the industry into the Integrated Personnel Payroll Information System (IPPIS).

PENGASSAN in the statement by its National PRO, Emmanuel Ojugbana, said despite agreement reached between the Federal Ministry of Labour and Employment, employers, and the two trade unions in the industry (PENGASSAN and the Nigeria Union of Petroleum and Natural Gas Workers, NUPENG, some employers still went ahead to sever employment of some workers, including national officers of PENGASSAN.

Ojugbana said, “Despite the agreement that employers should put on hold redundancy in the industry, some managements such as Fugro, Universal Energy, Frontier Services and Petrostuff went ahead to sack many of our members including key union officers and national officer.”

“I want to reiterate our demands that the Federal Government and the concern organisations including H15, IEME Chevron, Universal Energy, Chevron Contracts Tecon and Avion Oil and Fugro should resolve the critical industrial relation issues in their companies; particularly in the recent retrenchment in Fugro and Petrostuff should be reversed.

“Let us state unequivocally that industrial peace in the oil and gas sector will not be guaranteed if these issues, especially the retrenchment in Fugro, are not resolved within seven (7) days effective Monday, June 20, 2016. As a major stakeholder in the oil and gas industry, we are again calling on the NAPIMS to put in place a clear policy statement against frequent redundancy plans by operators under the guise of fluctuating crude oil prices.”

The PENGASSAN spokesman said that apart from the arrears, the current cash calls are delayed and even when paid, it is much below approved cash call without consideration of JV commitment including staff salaries.

“The effect of non-payment has led to thousands of job losses across the sectors and non-creation of new jobs against the backdrop of the electoral promises of employment generation by the current government. A stitch in time saves nine,” he said.