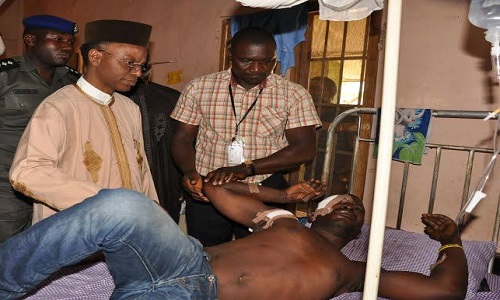 The Supreme Council for Sharia in Nigeria (SCSN), Kaduna State Chapter, on Sunday declared that the attack on one Francis Emmanuel, a Christian, for eating during the Ramadan fast was not Islamic.
The Chairman of the council, Sheikh Yusuf Rigachikun, stated this when he led other members of the SCSN to St. Gerard’s Catholic Hospital, Kaduna, where the victim is currently recuperating.
It would be recalled that the victim, a carpenter, was attacked with knives and other dangerous weapons by unknown persons on Tuesday in Kakuri, Kaduna, for eating during the fasting period.
Represented by Tukur Abdussalal, a member of the council, Rigachukun said that the council was “upset” after receiving the news of the ugly incident and decided to visit and console the victim.
The council, which condemned the attack on Emmanuel in strong terms, apologized to him.
Rigachukun pointed out that that as a Christian, the victim had nothing to do with Islamic practices, adding that there was no basis for the attack.
“Even if it was a Muslim that decided to eat during Ramadan, no one has the right to attack him. The best any one can do is to sue such person to Sharia Court for appropriate action.
“In fact, Islam did not forbid eating during Ramadan in the first place to have warranted such ugly incident.
“Whatever any Muslim decided to do, fasting or no fasting, is for himself”, the Kaduna SCSN chairman stressed.
In the same vein, the Secretary of the council, Malam Abdulrahman Hassan, appealed to members of the public to desist from taking laws into their hands.
“The action of these people is not Islamic and therefore unacceptable in Islam; even Prophet Mohammed warned that there is no compulsion in Islam”, Hassan said.
The council thereafter presented a cash donation of N100,000 as assistance to the victim and wished him quick recovery.
Receiving the donation on behalf of the family, Mr. Paul Emmanuel, elder brother of the victim, thanked the council for the gesture, saying “Acts of kindness and affection like this are what we need to promote peaceful coexistence”.
The visit of the council came after the state governor, Malam Nasir el-Rufai, also visited Emmanuel on his hospital bed a day after the attack and directed the police to arrest the perpetrators of the attack.
El-Rufai warned that the state government would not tolerate religious violence and criminality.