Nigerian football legend Stephen Keshi, one of the greatest players to come out of Africa is dead. 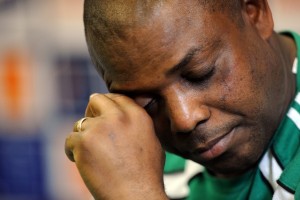 The Chairman of the Edo State Football Association (EFA), Frank Ilaboya, confirmed the sad news on Wednesday quoting Mr. Keshi’s faimily member, Ricky Aburimen, as saying the Eagle’s former coach only complained of a leg ailment while holidaying at his Airport road home in Benin before he passed away.
He said the former Malian coach died on the way to hospital at about 3 am.

As of the time of this report, Keshi’s corpse has been deposited at Idahosa Hospital in Benin.

Meanwhile, a statement on Mr. Keshi’s death had been released by Emmanuel Ado, brother and aide to the late Mr. Keshi, said: “With thanksgiving to God, the Ogbuenyi Fredrick Keshi family of Illah in Oshimili North Local Government Area of Delta State, announces the death of Mr. Stephen Okechukwu Chinedu Keshi’.

“Since her death, Keshi has been in mourning. He came back to Nigeria to be with her. He had planned to fly back today (Wednesday), before he suffered a cardiac arrest. He has found rest.”