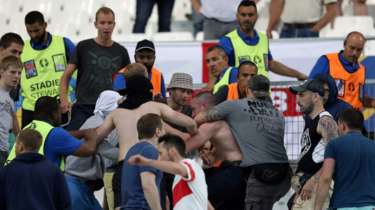 Three Russian fans have been sentenced to jail in connection with the violence in Marseille which occured at the Euro 2016 tournament.

Violence erupted at the stadium just after both teams concluded their opening group encounter.

The three men who were arrested on Tuesday were said to be the masterminds of the violence following Russia’s 1-1 draw with England at the Euro 2016.

The men, whose identities have not been revealed were handed 12, 18 and 24 month sentences. They will also be banned from entering France for two years.

Russian authorities have faulted the decision to imprison the fans as diplomatic tensions rise in France.