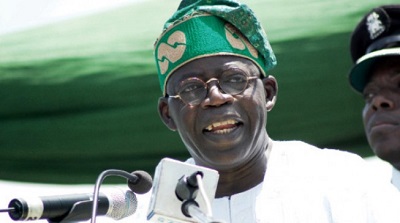 Nigerians have been urged to speak up against any form of financial recklessness and corruption in high places, federal, state or local administration and wherever it is found.
National leader of the governing All Progressives Congress, APC, Asiwaju Bola Tinubu, who made the call on Sunday, said such is the spirit of June 12 struggle.
Mr. Tinubu also drummed up support for the ongoing anti-corruption campaign of the APC-led federal government.
In a message he personally signed and issued to reporters yesterday in Lagos to mark the 23rd anniversary of the June 12, 1993 presidential elections, the former Lagos state governor noted that “after the struggle in the hands of the PDP-led government, Nigerians got a raw deal”.
According to him, the seed of democracy was sown during the June 12 struggle of which Chief MKO Abiola remained the spirit and the moving force.
“Just like in the moving spirit of June 12, Nigerians must speak up against any form financial recklessness and corruption in high places, in their states or local administration and wherever this is found.
“Beyond speaking against and exposing corruption, Nigerians must speak for and in support of the on-going concerted efforts being coordinated by President Muhammadu Buhari.
“But, beyond the historic mandate given to the All Progressives Congress, APC is the urgent need to have every citizen be part of the change we want to see.
“From the streets and crannies, from the classrooms and boardrooms, from the lecture halls and the corridor of power, from the lawmakers, ministers and leading politicians this is a season that demands our contribution, requires we make sacrifice and seeks that we work together towards building a critical mass that will see to the processes of the change vision now unfolding.
“Nigerians sustained the fervour and the patriotic disposition necessary for a new political culture to take root. However, 16 years after that struggle ended and the military departed, a new kind of struggle began. With a government of the people, by the people and for the people, the desire for rapid development and a disciplined and accountable leadership became an agenda item.
“But, again desirous of a change, Nigerians were again galvanized into voting the PDP out and voting in the APC with its message and philosophy of change”.
While appreciating the doggedness of his colleagues in NADECO, Tinubu also called on the pro-democracy activists, the civil society and the professionals who stood up to be military junta in defense of democratic rights of Nigerians to be vigilant and “ensure that disgruntled elements and the powers of yesterday, who we overthrew with our votes, do not destroy our democracy.
“Because a few courageous ones across the broad spectrum of the Nigerian society formed a coalition and lead from the front, the military was unable to get away with its constitutional impunity.
“Fired on by patriotism, resistant of years of oppressive military dictatorship and willing to do something about the situation Nigerians pushed the limits of civil disobedience against tyranny. By so doing, Nigerians pushed the military out, demanding for democratic governance and since then, there has been no looking back”.