Home News Feed To Avenge His Own Death, See What Young Man Was Buried With...
Facebook
Twitter
WhatsApp

A 22-year-old young man in Ghana, Richmond Osei, aka Tawiah,  who died out of police brutality, was buried on Thursday, June 16.

Tawiah was buried amidst invocation of curses by the family. He was allegedly brutalized to death by the police on patrol duties after he was mistaken as a thief. The family put some items such as eggs, cutlass, bullet cartridge, knife, a piece of kente cloth, a pair of shoes, cup and a broom in his casket. The items, according to them, are meant to aid him in the spirit world to avenge his death. 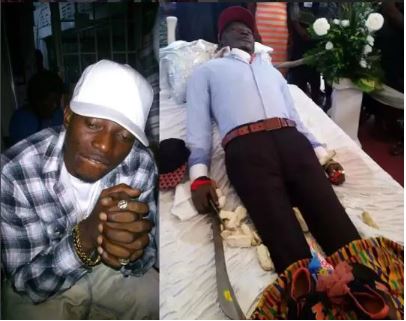 Taiwah before his death and during burial

His aunt said she had ‘nsamankom‘ (a trance that enables the living to interact with the dead) and Taiwah instructed the family through her to put the items in the coffin to avenge his untimely death. The family contested the autopsy report which said he died of natural causes. The report concluded that Tawiah died of a heart attack.

In an interview, one of the family members said: “its all about tradition, we want him to haunt his killers by using these items, he shouldn’t allow them to go scot free, he should deal with them in equal measure, we want him to use the cutlass to butcher the police involved in the act and any management member of the Komfo Anokye Teaching Hospital (KATH) who also has a hand in his death.”

May his soul rest in peace!
Source: Naij