The authorities of the University of Lagos (UNILAG) have set up a Senate Disciplinary Panel to punish students believed to have participated in the recent protest on campus. Already, the panel has started inviting the students for interrogation in a bid to punish them for lawfully expressing their dissatisfaction with the deplorable welfare conditions in the university. 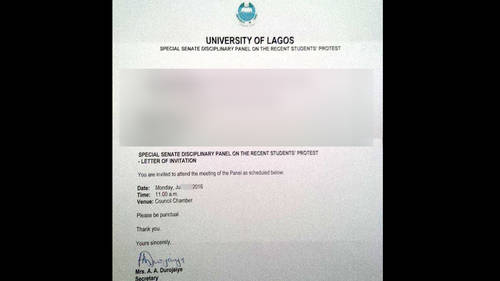 The move is an extension of the punitive action against the University of Lagos Students’ Union, which resulted in  the suspension of its constitution as well as the executive and legislative organs of the union just one year after these were restored by the authorities. On 8 April, the university authorities issued a school closure and vacation order to all the students in response to their protest through which they demanded solutions to poor water and electricity supply on the campus.

But on reopening the university, the authorities ejected all members of the Students’ Union from their campus accommodation, citing their protest against poor welfare in April.  In newspaper publications, the university authorities attributed the students’ demonstration to exuberance and accused the Students’ Union leadership of lacking integrity.

So far, the disciplinary panel has invited nearly every member of the suspended Students’ Union.
A source familiar with workings of the university authorities told SaharaReporters that the move is part of a plot to distract the students from launching a fresh protest for the restoration of the suspended union.

The source added that the students have launched a social media campaign for the restoration of the University of Lagos Students Union (ULSU) under a hashtag #RestoreULSU. This, he added, has caused the authorities huge embarrassment, forcing them into a crackdown on students leading the agitation.