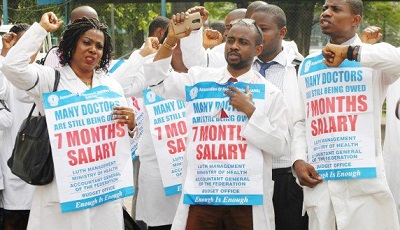 Medical doctors in Ekiti State on Wednesday declared an indefinite strike in protest of their five-month unpaid salaries and to demand improvement of medical facilities in their hospitals.
The strike notice was contained in a communique signed and issued by the acting president of the Association of Resident Doctors, Tunji Alaoye, and the chairman of the National Association of Government General Medical and Dental Practitioners, Ekiti State, Folu Ekundare.

It would be recalled that organized labour in Ekiti State issued a stay-at-home order to worker three weeks ago for reasons of unpaid salaries.
Health workers, who initially obeyed the directive, later withdrew citing love for the citizenry and the hope that government would consider paying their January salary from the last federal allocation.

The communique issued yesterday in Ado-Ekiti, the state capital reads: “This is to notify the general public especially residents of Ekiti State and its immediate environs that rising from a joint emergency meeting of the National Association of Government General Medical and Dental Practitioners, Ekiti State, branch (NAGGMDP) and the Association of Resident Doctors in Ekiti State Teaching Hospital held on the 14th of June 2016 at the NMA Doctors House along Ado-Iyin road to discuss issues bordering on the welfare of doctors working with the Ekiti state government (state specialist hospitals, general hospitals and the Ekiti state University teaching hospital) a painful, hard, unfortunate and difficult decision that could have been avoided if the necessary actions had been taken, was reached by our members.

“All members of the above named associations, (NAGGMDP Ekiti State, and ARD EKSUTH) have resolved to embark on a total and indefinite strike action, starting from midnight on the 15th of June 2016.
“We implore the general public to bear with us as we assure you that we are always open to dialogue and negotiation”.