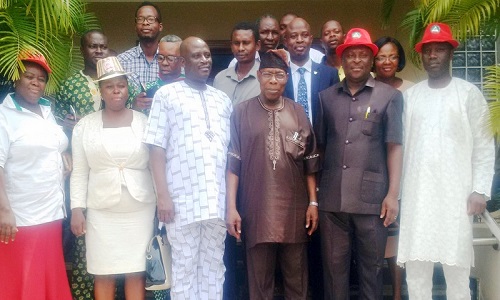 The protracted impasse between workers and governors in the six South-West states over unpaid salaries has led the leadership of the Trade Union Congress (TUC) in the region to seek the intervention of former President Olusegun Obasanjo.

The union leaders on Tuesday met with Chief Obasanjo behind closed-doors at his hilltop mansion in Abeokuta, the Ogun State capital for over an hour.

The union’s delegation was led by the South West Coordinator of TUC, Olubunmi Fajobi. Speaking with reporters after the meeting, Mr. Fajobi, who doubles as the TUC Chairman in Ogun State, said they decided to seek the intervention of the former president over the lingering issue of their unpaid salaries since they were convinced he was the only person that commanded greater respect of the governors involved.
He said some issues the congress tabled before Mr. Obasanjo during the meeting included the continued non-payment of workers’ salaries running into about 13 months, unremitted contributory pensions’ deductions running to 19 months as well as the unremitted cooperative deductions from the workers’ salaries covering the same period, among others.
‎The labour leader stressed that the meeting became necessary considering that the former Nigerian leader experienced similar situations in the past and was in best position to intervene on the matter.
“As labour leaders, we are particularly disturbed about the issue of unpaid salaries in our states and we believe the sweat of our workers must not be allowed in vain. We know that Obasanjo has the ears of these governors.
“That is why we are seeking his assistance to intervene in the matter”, Fajobi said.
On the threat by some governors in the region to invoke the no-work-no-pay rule, the labour leader faulted their tough stance, saying such was against the rules of fair play in labour engagement.
Present at the meeting with the former president were: Comrade Akinyemi Olatunji (Osun), Francis Ogunremi (Lagos), Andrew Emelieze (Oyo), Clement Fatunase (Ondo Secretary), Adebisi Adebayo (Ekiti Secretary), Gbenga Ekundayo (Lagos), Bola Fajulugbe (Ekiti Women Leader) and Olaniyi Okewole (Ogun Secretary).